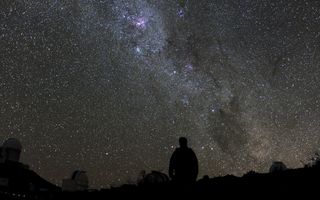 A piercingly bright curtain of stars is the backdrop for this beautiful space wallpaper taken by astronomer Håkon Dahle.
(Image: © ESO/H. Dahle)

A piercingly bright curtain of stars is the backdrop for this beautiful space wallpaper taken by astronomer Håkon Dahle. The silhouetted figure in the foreground is Håkon himself surrounded by just a couple of the great dark domes that litter the mountain of ESO’s La Silla Observatory. The Milky Way is brighter in the Southern Hemisphere than in the North, because of the way our planet’s southern regions point toward the dense galactic center. One of the best aspects of La Silla Observatory is that it is far away from bright city lights, giving it some of the darkest night skies on Earth. This image was released Aug. 19, 2013.