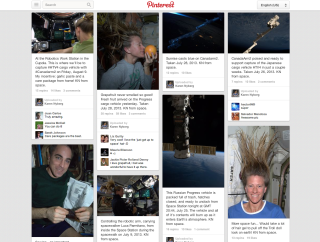 A NASA astronaut has taken the social media service Pinterest into the final frontier, where she pins her favorite space photos while soaring around Earth on the International Space Station.

Since launching into space in May, astronaut Karen Nyberg has been "pinning" away on the photo sharing social media website Pinterest, documenting her months-long space voyage. Nyberg, who is also chronicling her space exploits on Twitter as @AstroKarenN, had more than 6,300 followers on Pinterest as of Tuesday (Aug. 13).

"I've been using Pinterest for a couple of years and absolutely love it because of my other hobbies," Nyberg said before launching into space in May. "Definitely, we're going to do as much as we can to share what we're doing with the world while we're up there."  [Amazing Space Photos by Astronaut Karen Nyberg (Gallery)]

Social media has been a ubiquitous tool for astronauts living in space since 2009, when NASA astronaut Mike Massimino sent the first Twitter message from space during a mission to the Hubble Space Telescope. Canadian astronaut Chris Hadfield became a social media star thanks to his regular Twitter, Facebook and YouTube updates, and some astronaut profiles on NASA's website prominently feature social media links and handles ripe for following.

Nyberg's diverse areas of interests — including quilting, crafting and running — take center stage on Pinterest. While some of Nyberg's 23 pin boards are still devoted to those other interests, the astronaut uses about seven boards to bring photos and information about spaceflight and the science of it to her followers.

"When girls see pictures of ponytails, don't you think it stirs something inside them that says, that could be ME up there!" Nyberg wrote introducing her "hair in space" board.

Nyberg also pins photos of Earth from space and has devoted one board to "simple joys on Earth" — a hashtag she used on Twitter to share parts of her life on the planet before launching to the International Space Station.

Nyberg has also posted photos documenting her preparation for spaceflight as well as photos of other astronauts on either shuttle missions or onboard the International Space Station.

Nyberg launched to the orbiting laboratory on May 28 with Russian cosmonaut Fyodor Yurchikhin and European Space Agency astronaut Luca Parmitano. They are now living and working with NASA's Chris Cassidy and cosmonauts Pavel Vinogradov and Alexander Misurkin onboard the $100 billion outpost.

You can explore Nyberg's posts and start following her on Pinterest here.