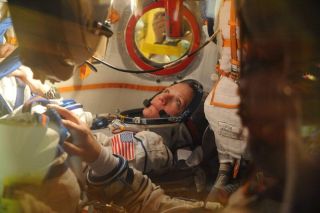 NASA's Karen Nyberg sits in the Soyuz spacecraft that is scheduled to launch her and two other astronauts to the International Space Station on May 28. Image released on May 17, 2013
(Image: © Karen Nyberg / @AstroKarenN / NASA)

An American astronaut is about to get seriously crafty in space.

When NASA's Karen Nyberg, the European Space Agency's Luca Parmitano and Russian cosmonaut Fyodor Yurchikhin officially launch on board a Russian Soyuz spacecraft to the International Space Station on May 28, the American astronaut will bring a few key creative items with her.

"I actually enjoy sewing and quilting and I am bringing some fabric with me and thread and I'm hoping to create something," Nyberg said. "I don't know yet what it will be but that's part of creativity is that it comes with the feeling of the day so I have the supplies in my hands to create if I get the opportunity and the creative notion to do so." [Women in Space: A Gallery of Firsts (Photos)]

Although the six-month-stint will be Nyberg's longest in space, it is not her first time visiting the International Space Station.

"I'm looking forward to the most this time actually living there," Nyberg told SPACE.com. "I visited space station in 2008 on the space shuttle Discovery, and it was a very, very quick trip, only 14 days and honestly, I don't really remember a lot of it because it just flew on by so fast."

Nyberg, 43, is planning on sharing her experiences on board the station with the world using social media, although she has only be using Twitter (where she posts from the account @AstroKarenN) for a little over a month. She is also on Pintrest with the handle: knyberg.

Nyberg follows in a line of female astronauts who have spent time on board the International Space Station.

"The females that have lived on space station before me are incredible people and have given me a lot of advice on living there and also dealing with having a child at home while living there," Nyberg said. "So it's just fantastic to follow in their footsteps."

The Minnesota native admits that she will miss a few things about life back on Earth aside from her family.

"I also will definitely miss coffee in the morning out of a cup," Nyberg said. "It's just not quite the same when you drink your coffee from a bag."

Nyberg, Parmitano and Yurchikhin will complete the space station's Expedition 36 crew when they join NASA's Chris Cassidy and Russian cosmonauts Alexander Misurkin and Pavel Vinogradov on the orbiting laboratory at the end of the month.