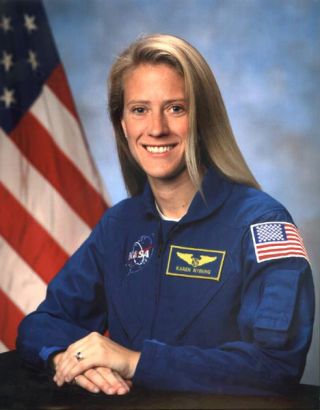 NASAEXPERIENCE: Co-opat Johnson Space Center from 1991-1995, working in a variety of areas. Shereceived a patent for work done in 1991 on Robot Friendly Probe and SocketAssembly.

In 1998, oncompleting her doctorate, she accepted a position with the Crew and ThermalSystems Division, working as an Environmental Control Systems Engineer. Herprime responsibility involved using human thermal physiology and engineeringcontrol for improvements in the space suit thermal control system andevaluation of firefighter suit cooling technologies.

Selected asa mission specialist by NASA in July 2000, Dr. Nyberg reported for training inAugust 2000. Following the completion of two years of training and evaluation,she was assigned technical duties in the Astronaut Office Station OperationsBranch where she served as Crew Support Astronaut for the Expedition 6 Crewduring their six-month mission aboard the International Space Station. Dr.Nyberg is currently assigned duties in the Space Shuttle Branch and theExploration Branch. She will serve in technical assignments until assigned to aspace flight.