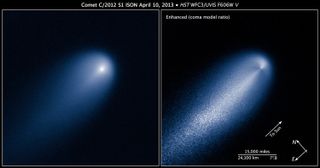 These images of Comet ISON were taken by NASA's Hubble Space Telescope on April 10, 2013, when the comet was 386 million miles from the sun. The image at right has been computer-processed to reveal the structure of ISON's inner coma.
(Image: © NASA, ESA, and Z. Levay (STScI))

About 10,000 years ago, Comet ISON left our solar system's distant shell, a region known as the Oort cloud, and began streaking toward the sun. This November, the icy wanderer will reach the climax of its journey, potentially providing a stunning skywatching show here on Earth.

Comet ISON was discovered just last September by two Russian amateur astronomers. Scientists have since recognized ISON as a possible "comet of the century," but to live up to its promise, it will have to survive its dangerous perihelion, or closest approach to the sun.

ISON is what's known as a sungrazing comet. These suicidal objects have orbits that bring them within 850,000 miles (1.4 million kilometers) of the sun, and scientists estimate that ISON's closest pass will be about 730,000 miles (1.2 million km) above the surface of Earth's star. [Photos of Comet ISON: A Potentially Great Comet]

Sometime this month or perhaps in August, ISON is set to cross what's called the frost line. At this boundary, which lies some 230 million to 280 million miles (370 to 450 million km) from the sun, our star's radiation will start taking its toll on the comet, driving off more of its water and making ISON appear brighter.

ISON's road will only get rockier from there. After the comet flies by Mars in October and then Mercury in mid-November, intensifying solar radiation will boil more material off ISON; pressure from solar particles could break the comet into pieces; tidal forces will create great gravitational stress; and one ill-timed solar storm could rip the comet's tail right off.

All eyes will be on ISON as it makes this perilous journey. The comet has already had its picture taken by NASA's Hubble Space Telescope and Swift spacecraft, and in the coming months, the agency has a slew of ISON observations planned for its solar telescopes in space and some instruments on the ground.

In September, NASA will even launch a comet-watching balloon almost 23 miles (37 km) above Earth's surface to capture images of ISON with minimal interference from the atmosphere.

If the sun is merciful to ISON when it whips around the star on Nov. 28 (Thanksgiving Day), the comet could light up the sky for weeks. In the Northern Hemisphere, it could be visible in the morning near the east-southeast horizon in early December. Later in the month, and into early January, the comet could be visible all night, according to NASA.

Even if ISON fizzles, tracking the comet's path and reaction to solar forces could shed light on the makeup of the early solar system, scientists say.

Sungrazing comets like ISON sometimes plunge into parts of the sun's fiery atmosphere where no spacecraft can go. Researchers can learn about the sun itself by watching how the comet and its tail interact with the solar atmosphere.

For example, Comet Lovejoy passed just 87,000 miles (140,000 km) above the solar surface in mid-December 2011. The strange wiggle of Lovejoy's tail as it dove through the sun's corona helped scientists map out the region's complex magnetic field.

Editor's note: This article was updated to correct the conversion of 850,000 miles (1.4 million kilometers).