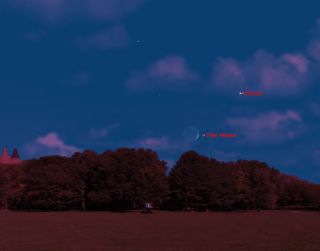 This sky map shows the locations of Venus and the moon on July 10, 2013, in the western sky as they appear to observers in mid-northern latitudes, weather permitting.
(Image: © Starry Night Software)

The brightest of all the planets has been playing coy for a couple of months now, peeking through the evening twilight just above the west-northwest horizon, and then setting before dark. But tonight (July 10), it will shine with the moon.

I'm referring, of course, to the planet Venus, which unfortunately will continue this game for the rest of the summer, so don't expect a really spectacular view of it anytime soon. But that's not to say that it will not be prominent through July.

If you look low in the west-northwest sky, Venus may be the first point of light you see after sundown, weather permitting. The planet is just not very high for viewers at mid-northern latitudes. [Amazing Night Sky Photos for July 2013]

Each evening, through the rest of this month, you can try to glimpse Venus about 16 degrees above the horizon at sundown, and follow this celestial jewel until it sets in the west-northwest about 90 minutes later. For reference, your clenched fist held at arm's length measures roughly 10 degrees, so at sundown Venus will be situated about one-and-a-half fists above the horizon.

As the northern summer progresses, Venus consents to give us an ever-so-slightly longer view of itself in twilight. But because it keeps quite low for viewers at mid-northern latitudes all this summer, its image in telescopes will appear fuzzy and shaky through so much air near the horizon, making it seem disappointingly small and gibbous.

Fortunately, things are livened up by Venus' interactions with other celestial objects.

Tonight (July 10), a very thin crescent moon, just 7-percent illuminated and two-and-a-half past new phase will be passing about 8 degrees below and to the right of Venus. This is admittedly a rather wide separation, but nonetheless this configuration between the two brightest objects in the night sky will still make for an eye-catching configuration in the twilight sky.

Also for the next week or so careful observers will notice that the seasonal progression of the constellations is bringing the bright star Regulus, the heart of Leo, a little closer to Venus each evening.

On the evening of Monday, July 22, binoculars will help show Venus' close pairing with that much fainter blush star.  Venus will appear to hover almost directly above the star. The two brilliant objects will be separated by just over 1 degree, but Regulus will appear to glimmer only 1/126 as bright as Venus, the dazzling Queen of the Night.

Editor's note: If you snap an amazing picture of the night sky that you'd like to share for a possible story or image gallery send photos, comments and your name and location to Managing Editor Tariq Malik at spacephotos@space.com.

Joe Rao serves as an instructor and guest lecturer at New York's Hayden Planetarium. He writes about astronomy for "Natural History" magazine, the "Farmer's Almanac" and other publications, and he is also an on-camera meteorologist for News 12 Westchester, New York. Follow us @Spacedotcom, Facebook and Google+. Original article on SPACE.com.