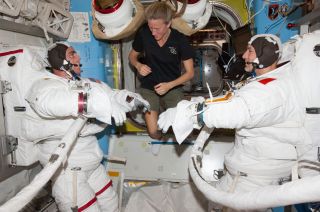 Two astronauts will work outside the International Space Station for 6 1/2 hours on Tuesday, and you can follow all the free-floating action live.

Tuesday's spacewalk is the first of two that Expedition 36 crewmembers Cassidy and Parmitano will make together this month, with the second coming on July 16. Both excursions will help prepare the $100 billion orbiting laboratory for a new Russian module and address a variety of maintenance and repair needs, officials said. [Space Station's Expedition 36 in Photos]

"These are just a mixture of different, unrelated tasks, for the most part, that we're trying to burn down," spacewalk flight director David Korth, of NASA's Johnson Space Center in Houston, told reporters last week.

During Tuesday's spacewalk, for example, Cassidy will route power cables to support Russia's Multipurpose Laboratory Module, which is scheduled to arrive at the station at the end of this year. The MLM, dubbed "Nauka," will be used as a research facility, docking port and staging ground for Russian spacewalks, NASA officials said.

Cassidy will also replace a communications controller unit that failed in December, among other activities, while Parmitano's task list includes retrieving two materials experiments that are slated to return to Earth aboard SpaceX's robotic Dragon cargo capsule in late 2013.

Parmitano will also snap some photos of the Alpha Magnetic Spectrometer (AMS), a $2 billion instrument that was installed on the space station's exterior backbone in May 2011 to detect antimatter and hunt for evidence of elusive and mysterious dark matter.

"My understanding is it's not a scientific reason," Korth said of the AMS photography request. "They've seen some discoloration on the radiators. They're not sure if that was something in ground processing or some phenomenon that's happened on orbit, so they've asked if we could just get some photos, since we'll be near the work site and will have good angles."

Tuesday's spacewalk will be the fifth for Cassidy, who will be leading the excursion and wearing red stripes on his spacesuit. Parmitano will be making his first spacewalk, as well as the first ever for an Italian astronaut. His suit will bear no stripes.

"I know they're both excited and ready to go," Korth said.

For both spacealks this month, NASA astronaut Shane Kimbrough will provide ground support to Cassidy and Parmitano from mission control in Houston.