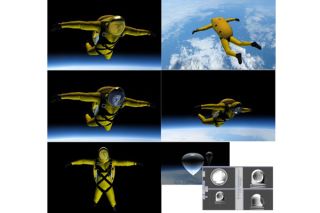 A futuristic space-suit being developed will take the high altitude adventurer of tomorrow from the total vacuum of outer space, through the searing heat of atmospheric reentry, then down to the surface of the planet earth for a pinpoint landing that even Elon Musk would be envious of and one that Tony Stark, the “Iron Man” himself, would be totally familiar with.

Two fledgling start-ups, Juxtopia LLC and Solar System Express, both of Baltimore Maryland, are combining their respective talents to assemble The RL MARK VI Space Diving Ensemble — hardware that, until now, only a bona fide superhero could truly appreciate. And, with this collaboration will come the ability for future space travelers — both in emergency situations and in recreational pursuits — to exit a spacecraft in low-earth orbit, reenter the earth’s atmosphere and return safely back to the ground. [Spacesuit Suite: Evolution of Cosmic Clothes (Infographic)]

Juxtopia’s augmented reality goggles will feed tomorrow’s space diver with a visual display of all the vital information he will need to successfully navigate his way back to the surface of the planet. A pair of gyroscopic boots from Solar System Express will steady the jumper’s descent through the upper atmosphere until the air becomes thick enough for aerodynamic control.

The developers plan to test their system using traditional parachute jumps, witha production model of the RL MARK VI estimated for delivery in 2016.

Read the full story about the technology in "Revolutionary New Space-Diving Suit Will Rival Anything You’ve Ever Seen In The Movies."