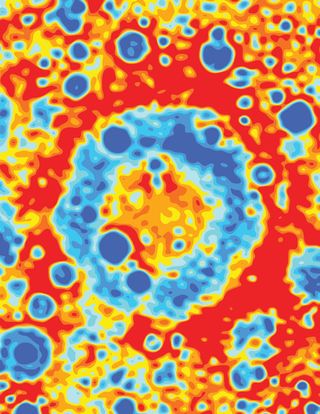 Gravitational anomalies over the Freundlich-Sharonov impact basin, which is located on the far side of the moon.
(Image: © H. J. Melosh/Purdue University/NASA Grail team)

A pair of spacecraft that meticulously mapped the moon's gravitational field has helped astronomers solve the long-standing mystery of why the moon is so gravitationally lumpy.

A team of scientists used data collected by NASA's twin Grail probes— which ended their yearlong gravity-mapping mission in December 2012 by crashing into the moon — to glean new details about strange concentrations of mass that sit hidden beneath the lunar surface. These geologic structures, called mascons (short for mass concentrations), are so dense they alter the moon's gravity field, causing perturbations that can tug a spacecraft lower in its orbit around the moon, or push it wildly off course.

Mascons were discovered in the 1960s, as NASA officials were planning for the Apollo moon missions, but the cause of these gravitational anomalies was unknown, said Jay Melosh, a geophysicist at Purdue University in West Lafayette, Ind., and lead author of the new study, published online today (May 30) in the journal Science. [20 Most Marvelous Moon Missions]

"Mascons were nothing more than navigational hazards when they were first discovered," Melosh told SPACE.com. "They were a real pain in the neck for Apollo planners — like reefs in an ocean, they were things to be avoided and planned around."

By mapping the moon's gravity field, the Grail probes uncovered the locations of lunar mascons, and offered unprecedented views of the moon's interior structure. This enabled scientists to study two basins —  one on the lunar nearside and one on the far side of the moon — to develop sophisticated computer models for how mascons form.

Billions of years ago, massive asteroids that collided with the moon left deep craters that reached into the mantle material that lies beneath the thin lunar crust. What had been unexplained until now was how these big impact sites could support extremely dense material, and how the gravity field in these basins could be in such disequilibrium, Melosh said.

"At first, the mascon problem seemed to have an easy solution," said study co-author Jeff Andrews-Hanna, an assistant professor in the geophysics department at the Colorado School of Mines in Golden, Colo. "The mascon basins on the near side of the moon were partially filled in with ancient flows of dense lava, which seemed able to account for the mass excess and positive gravity anomalies.

“However, it soon became apparent that for some basins, the observed lava flows were too thin to explain the mass excess," Andrews-Hanna told SPACE.com. "Some basins were even found that exhibited mascons but lacked lava infill altogether."

The researchers determined that ancient asteroid impacts excavated large craters on the moon, causing surrounding lunar materials and rocks from the moon's mantle to melt and collapse inward. This melting caused the material to become denser and more concentrated, the researchers said.

"As the hot materials cool and the surface chills, it becomes strong, and it can support the load of the extra-dense material from the lunar mantle," Melosh explained.

The strong lunar crust, which also slides down into the impact hole, eventually forms a curved but rigid barrier over the basin, holding the dense materials down.

Melosh and his colleagues used data on the distribution of masses in the moon to create computer simulations of how the moon's crust and mantle behaved billions of years ago. These models gave the researchers a glimpse of how the moon's mascons formed in the aftermath of huge asteroid impacts.

The results of the new study offer more hints about the moon's dynamic evolution, said Laurent Montesi, an associate professor in the department of geology at the University of Maryland in College Park and author of an editorial in the journal Science commenting on the findings.

"What's really cool about this is, now we're able to investigate exactly what conditions lead to the presence or absence of mascons," Montesi said. "Now that we know something about the interior of the moon, we can tweak this model to study mascons and thermal conditions on other planets."

Mascons are known to exist on Mars and Mercury, but not on Earth, simply because the asteroid impacts and subsequent craters were not big enough to churn up materials from the Earth's mantle. Still, understanding mascon formation can provide astronomers with a firmer understanding of how large impacts can alter the geology of planets and moons.

"We now know the ancient moon must have been much hotter than it is now and the crust thinner than we thought," Melosh said. "For the first time, we can figure out what size asteroids hit the moon by looking at the basins left behind and the gravity signatures of the areas. We now have tools to figure out more about the heavy asteroid bombardment and what the ancient Earth may have faced."