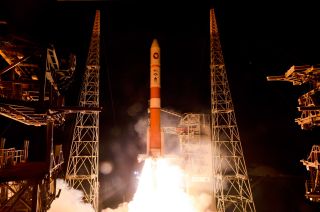 With one more satellite needed in its new military communications system to extend blanket coverage over virtually the entire planet, the spacecraft to make the network's reach global was sent thundering into orbit Friday to join the Air Force's broadening constellation serving troops, ships, drones and civilian leaders.

Forty-one minutes later, the powerful booster successfully released the 13,200-pound payload into an orbit looping as high as 36,125 nautical miles, as low as 237 miles and tilted 24 degrees to the equator.

Controllers at Boeing's facilities in El Segundo, Calif., will maneuver the satellite into a circular geosynchronous orbit by early summer, allowing the craft to match Earth's rotation and appear fixed above the globe. [See photos of the amazing Delta 4 rocket launch]

An extensive checkout and commission process that will stretch into next year to ready the satellite for operations from 52.5 degrees West longitude for its mission to provide communications support to the Americas.

"WGS 5 will provide three new capabilities that expand the constellation -- increase in capacity to the U.S. and six international partners, expanded coverage leading us to near-worldwide coverage at this point and, with operational acceptance of WGS 5, we will be able to achieve full operational capability of the system," said Luke Schaub, chief of the Wideband SATCOM division of the MILSATCOM Systems directorate at the Space and Missile Systems Center in Los Angeles.

Known as WGS 5, this satellite is the fifth in a major program to upgrade to the military's main communications infrastructure, replacing the aging Defense Satellite Communications System (DSCS) spacecraft. Each WGS has 10 times the capacity of a DSCS satellite, allowing users to process and receive data quicker than ever before.

"We have four in operation today. Those four are pretty much located on the other side of the globe from the United States. They're really located strategically between the eastern Atlantic and the western Pacific. Today, we do not have any WGS capability over the continental United States," Schaub said.

"This satellite is being launched into an orbit at 52.5 West, which is off the east coast of the United States, with the intention of closing that gap and providing, with its transfer into operations, near-worldwide coverage."

WGS 1 was launched in October 2007 to cover the vast U.S. Pacific Command that stretches from the U.S. western coast all the way to Southeast Asia.

WGS 2 satellite followed with an April 2009 launch to serve U.S. Central Command and the forces in Afghanistan, Iraq and other parts of Southwest Asia.

WGS 3 went up in December 2009 to cover U.S. European Command and U.S. Africa Command, plus lend additional support over the Middle East.

WGS 4 inaugurated the upgraded Block 2 series for improved communications with unmanned aerial drones when it was launched in January 2012 to cover the Middle East and Southeast Asia for use by U.S. Central Command and U.S. Pacific Command.

The inclusion of WGS 5 will extend the Wideband Global SATCOM constellation to the Americas for a host of users.

"It gives us the CONUS coverage we don't have today," Schaub said.

"Think of it as this whole region, so NORTHCOM, SOUTHCOM, TRANSCOM, STRATCOM, MDA, a whole lot of U.S. and western hemisphere-based users will be using this satellite," Schaub added, referring to U.S. Northern Command, Southern Command, Transportation Command, Strategic Command and the Missile Defense Agency.

The craft's communications package provides shaped, steerable spotbeams of bandwidth wherever requested across its field-of-view for X- and Ka-band frequencies, plus the onboard capability to switch signals from one band to the other.

"WGS is the only military communications system that can support simultaneous X- and Ka-band communications with cross-banding that makes communications across terminal types transparent to the warfighters," Schaub said.

The X-band communications through DSCS and WGS allow data, photos and video to be relayed to troops on the battlefield. But WGS also brings Ka-band to the table for high-volume broadcasting to user terminals across the reception area.

"Virtually anything you can imagine doing (with communications) is what we support, primarily focused on areas that are hard to access with our landline systems," Schaub said.

"It runs the gamut from soldiers in the field to large operations and ships, video teleconferencing, voice, a lot of data transfers, the RF bypass that we're adding is really intended to allow for rapid transfer of data."

Three earlier satellites were built by Boeing as the Block 1 series and WGS 5 becomes the second of the upgraded Block 2 generation.

The bypass feature allows unmanned aerial drone communications to skip the crossbanding path and use two uplink and two downlink channels for three times the bandwidth as the normal channels, opening up a much bigger pipeline for data to flow.

Boeing has completed the WGS 6 satellite, which was shipped to the Cape last week for its launch in early August aboard the next Delta 4 rocket. The craft was built with funding from Australia as part of an international partnership on the communications system.

Satellites 7 through 10 are under construction at Boeing's factory in El Segundo for launches in the coming years.

"It's about adding additional capacity," Schaub said of putting five more satellites to the constellation. "We know there's an insatiable appetite for (satellite communications)."

WGS 9 is being built on a multi-lateral agreement with Canada, Denmark, Luxembourg, The Netherlands and New Zealand, bringing those nations into the network as well.

Friday's launch was the first for the Delta 4 rocket since it experienced an upper stage engine leak and lower-than-expected thrust while successfully deploying a GPS satellite seven months ago.

Although that investigation remains ongoing, officials cleared the Delta 4 for flight after ordering extra inspections on the powerplant for the WGS 5 mission, instituted in-flight helium purges and changed how the engine was thermally conditioned prior to ignition during the launch.

"The team has worked tremendously hard and exceptionally well to complete a robust investigation and get us to a successful launch today," said Jim Sponnick, United Launch Alliance vice president of mission operations.

There were no reports of any troubles during the flight, which marked the 22nd for a Delta 4 rocket since 2002 and the third to carry a WGS satellite.

It was ULA's 71st mission in 77 months, the fifth this year and the second in just 9 days. Next up will be another Atlas 5 on July 19 carrying the Navy's second MUOS mobile communications craft.

Delta 4 plans to perform the WGS 6 deployment from the Cape in early August and a classified Heavy launch for the National Reconnaissance Office from Vandenberg Air Force Base, Calif., in late August.

One further Delta 4 launch is planned this year, the program's 25th overall, in mid-October from the Cape with the GPS 2F-5 navigation satellite.