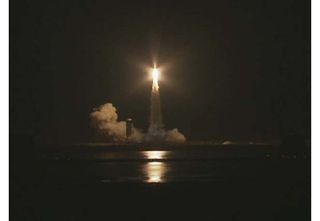 The Air Force's Wideband Global SATCOM 4 (WGS-4) satellite blasts off aboard a Delta 4 rocket on Jan. 19, 2012 in this screenshot from a United Launch Alliance webcast.
(Image: © ULA)

An unmanned rocket lit up the Florida night sky Thursday (Jan. 19) as it launched a vital new communications satellite into orbit for the U.S. military — the first major American space launch of the year.

Built by Boeing, the $464 million WGS-4 satellite is the fourth in a growing constellation of high-capacity satellites that provide tactical communications to and between ground forces, as well as relay data and imagery from surveillance and reconnaissance aircraft. The new satellites can provide more than 10 times the communications capacity of its predecessor system, Boeing officials said.

"It's a great feeling to see the launch of this fourth satellite, especially knowing how important the constellation is to our troops in the field," said Capt. Tim Trimailo, the Air Force's Wideband Global Satcom operations and sustainment lead. "WGS is a big upgrade for our nation." [Amazing Rocket Launch Photos]

The WGS system is the only U.S. military communications satellite network capable of providing simultaneous X and Ka band communications, and it offers point-to-point communication, broadcast and multicast services for troops, according to a mission description.

The 13,200-pound (5,987-kilogram) WGS-4 satellite is equipped with solar arrays to generate power and relies on a xenon ion drive for propulsion. It in will fly in a geosynchrounous orbit about 22,369 miles (36,000 kilometers) above Earth to provide communications services for troops in the Middle East.

Trimailo said there will be a series of tests and checkups to make sure the new satellite is functioning as designed before it gets to work.

"There are still a few months of hard work before we achieve full operations status," he said.

The first WGS satellite was launched in 2007, with two more following in 2009. With WGS-4 now in orbit, the next satellites in the constellation — WGS-5 and WGS-6 — are expected to launch by 2013, Boeing officials said.

The Air Force also ordered another satellite for the constellation, WGS-7, from Boeing in September 2011. On Wednesday (Jan. 18), Air Force officials also exercised options for yet two more satellites — WGS-8 and WGS-9 — in a deal worth $673 million.

"With these options exercised, we are able to expand the WGS constellation and provide communications resiliency for combatant commanders worldwide," said Craig Cooning, vice president and general manager of Boeing Space & Intelligence Systems, in a statement. "This will give warfighters the ability to ensure that vital communication links are available at all times, even in the event that one or more critical nodes are disabled."

The WGS-9 satellite is funded through an international partnership between the U.S. Air Force, Canada, Denmark, the Netherlands, Luxemburg and New Zealand.

Thursday night's launch was overseen by the United Launch Alliance, a joint venture of Boeing and Lockheed Martin that relies on the Atlas and Delta evolved expendable launch vehicle (EELV) families.

"WGS-4 will provide important capabilities to the soldiers, sailors, airmen and marines protecting our freedoms around the world," said Jim Sponnick, ULA's vice president of mission operations, in a statement. "This mission begins the most aggressive launch campaign in the history of the EELV program, with nine national security and two NASA launches scheduled this year."

Thursday's launch marked the third orbital launch of 2012 and followed two satellite launches by China last week. The next mission for United Launch Alliance will be on Feb. 16, when the company plans to launch an Atlas 5 rocket carrying the U.S. Navy's Mobile User Objective System 1 satellite.