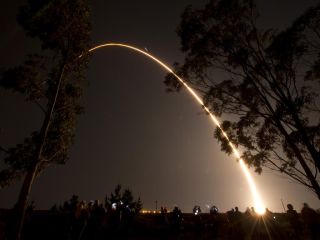 Astronaut Nicole Stott caught Juno's launch on August 5, 2011. She tweeted the picture with this comment: "Our view of Juno launch from Cocoa Beach. Next stop Jupiter! Beautiful!"

The Air Force's second X-37B space plane soars toward space atop an Atlas 5 rocket after launching from Cape Canaveral Air Force Station in Florida on March 5, 2011.

ESA’s second Automated Transfer Vehicle, was launched today evening from Europe’s Spaceport in Kourou, in French Guiana, at 22:50:55 CET by an Ariane 5 to deliver critical supplies and reboost the International Space Station

The exhaust plume of space shuttle Discovery casts a long shadow after the shuttle's final launch on Feb. 24, 2011 to kick off NASA's STS-133 mission to the International Space Station.