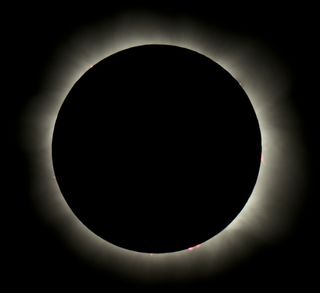 Of all the great and wondrous things that we can view in our sky, in my opinion the top four are (in descending order of merit) a total eclipse of the sun, a beautiful manifestation of the northern lights, a real "shower" of shooting stars and a great comet with a long tail.

With any luck (and some good weather), all four of these skywatching sights may be readily available to us in the near future. Here is a list of the Top 4 and when we might expect to see them:

A total eclipse of the sun

It lasts only a few minutes. It occurs on average just once every 18 months, and then has a perverse habit of taking place over Earth’s most remote, inhospitable places. Yet people will travel to the ends of the Earth, sparing no expense or trouble, to see it. [Solar Eclipses: An Observer's Guide (Infographic)]

You haven’t really lived until you’ve experienced a total solar eclipse. But beware! This is not something you can just put on your bucket list to do just once in your life and be satisfied. It’s addictive; once you’ve see one, you’ll want to see them all.

The next total solar eclipse will occur later this year, on Nov. 3. But before you start packing your suitcase, be advised that the eclipse track for this event starts out over the open waters of the Atlantic midway between Bermuda and Puerto Rico and heads east, ultimately passing south of the Cape Verde Islands, then curves southeastward parallel to the African coastline.

The path width will reach a maximum of just 36 miles (58 kilometers) about 250 miles (402 km) off the coast of Liberia, where the sun will be totally eclipsed for 100 seconds. The shadow track will then sweep across central Africa, passing over sections of Gabon, Congo, The Democratic Republic of Congo, Uganda and Kenya, before ending at sunset at the Ethiopia-Somalia border — not where most people would think of taking the wife and kids for a weekend jaunt.

But just over four years from now, the path of a total solar eclipse will go coast to coast over the lower 48 United States, marking the first such event in this part of the world since February 1979.

On Aug. 21, 2017, 12 million Americans will fortuitously find themselves within the sought-after path of totality. This path will extend from the Pacific Northwest to the southeastern U.S. Totality will reach the West Coast centered on Salem, Oregon; Portland will be just outside the path to the north.

Totality will darken the skies of Jackson Hole, Wyoming, and then, heading south and east, will graze Kansas City and St. Louis. The path will pass over "Music City" (Nashville, Tenn.) before finally reaching the Eastern Seaboard at Charleston, South Carolina before moving out to sea.

Totality will last the longest over Shelbyville, Kentucky — 2 minutes and 40 seconds. Don’t pass up the chance to see this, the grandest of celestial road shows!  Here’s a great site that provides more details about this upcoming event: http://www.eclipse2017.org/

Solar activity is ramping up toward an expected peak later this year, so it would be advisable to keep a careful watch on the northern skies from time to time over the next year or so for possible sightings of the aurora borealis, or northern lights.

This colorful phenomenon is produced when particles blasted out by the sun collide with atoms and molecules in Earth’s atmosphere. These atoms are temporarily stripped of some of their electrons by these collisions or near collisions.

The atoms absorb energy in the process. Within a millionth of a second, they regain their lost electrons and emit energy in the form of light. Most of this light appears yellowish-white with shades of green; some is red and pink, and some is green. [How the Northern Lights Work (Infographic)]

Typically, two or three days after big solar storm, seeing a supercharged aurora becomes a distinct possibility. Astronomers are not quite sure why, but the time around the equinoxes seems to be the best times of the year to see the northern lights.

A storm of meteors

The chances of seeing a meteor storm — more than 1,000 "shooting stars" per hour — or at the very least a strong meteor outburst with rates in the hundreds per hour, seemingly came and went at the beginning of this century with the November Leonids.

Spectacular displays occur at roughly 33-year intervals, when the comet responsible for these meteors passes through the inner solar system. The comet was last here in 1998 and the last really great Leonid meteor shower was in 2002.

But we might not have to wait until the 2030s for a chance at another possible meteor storm. In fact, our next chance might come next May!

On May 24, 2014, Earth will plow through a dense stream of dust particles shed by Comet 209P/LINEAR. Some reputable meteor scientists think the crossing could result in a strong meteor shower — maybe even a "storm."

"So far, given the observations, we estimate a rate of 100/hr to 400/hr, which is an excellent outburst!" notes Jeremie Vaubaillon, of the Institut de Mecanique Celeste et de Calcul des Ephemerides in France. "But this shower can become an exceptional one. Indeed, all the trails of dust ejected by comet LINEAR between 1803 and 1924 fall in the Earth’s path in May 2014!  As a consequence, this shower might be a storm."

Another meteor scientist, Mikhail Maslov of Russia, has made a "very cautious" estimate of 100 per hour, but with the following disclaimer: "It is difficult to estimate expected intensity of the outburst due to very small size of the comet itself and unknown level of its past activity, but it is very possible that real activity will turn out to be much higher. Storm levels are also far from being excluded."

Finally, there is the prospect of a spectacular comet gracing our sky toward the end of this year.

Comet ISON is expected to skim just above the sun’s surface on Nov. 28 (Thanksgiving Day), possibly becoming bright enough to be visible in broad daylight. It will then travel toward Earth, passing within 40 million miles (64 million km) of our planet a month later.

Since Comet ISON will become very well-placed for viewing in the morning and evening sky from the Northern Hemisphere during the weeks after its solar encounter, it could become one of the most-watched comets of all time.

We’ve been keeping track of ISON here at SPACE.com since its discovery last September and will continue to monitor its progress and development in the weeks and months to come. So stay tuned!

Joe Rao serves as an instructor and guest lecturer at New York's Hayden Planetarium. He writes about astronomy for Natural History magazine, the Farmer's Almanac and other publications, and he is also an on-camera meteorologist for News 12 Westchester, New York.  Follow us @Spacedotcom, Facebook or Google+. Originally published on SPACE.com.