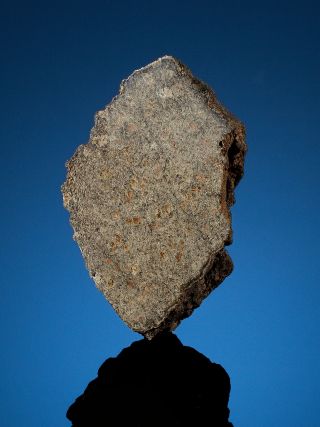 A meteorite that originated on Mars is expected to fetch at least $160,000 when it hits the auction block June 2 as part of a collection of rare geological specimens.

The Martian meteorite NWA 7397 was found in 2012 in Morocco's Sahara Desert. Scientists think it was part of a chunk of Mars that was chipped from the planet when an asteroid impacted it. At 1.37 lbs (0.62 kg), the sample going up for sale is the larger portion of the meteorite that landed on Earth; the rest of that rock was recently bought by a museum, according to Heritage Auctions, which is handling the sale.

Meteorites that came from Mars are incredibly rare — less than 300 pounds of them in total are known to exist on Earth. They tend to fetch higher prices than other types of meteorites, which usually originate from outer space, and sometimes the moon. The largest lunar meteorite ever auctioned, the4-lb (1.8 kg) Dar al Gani 1058 specimen, sold for $330,000 in an October 2012 Heritage Auction sale. [Photos: Amazing Meteorites from Mars]

The NWA 7397 meteorite is going on sale as part of a large collection of meteorites, fossils, and insects preserved in amber.

"The specimens in this sale represent some of the finest fossils, meteorites, and natural history items I have had the privilege to handle," Craig Kissick, associate director of nature and science for Heritage Auctions, said in a statement. "This auction will appeal to everyone fascinated by natural history and truly has something for everyone — even those new to this collecting genre."

Some other meteorites on sale in the collection are also expected to fetch high prices. Another meteorite found in the Sahara Desert of Morocco, classified as a chondrite meteorite, should sell for at least $15,000, experts say. At 19.57 lbs (8.9 kg), that specimen is much larger than the Martian meteorite, and features the largest example of gem-like olivine crystals ever collected, embedded in a silver nickel-ore matrix. A third space rock, a 16.86-lb (7.6 kg) muonionalusta iron meteorite, has been carved and polished into a "modern work of art," according to Heritage Auctions, and should bring in at least $18,000.

Other prizes going up at auction include a tuft of wooly mammoth wool 16 inches long (41 cm) that dates from the Pleistocene epoch (expected to sell for $400), and a prehistoric specimen of amber (fossilized tree sap) that caught two tiny midges in the act of copulation (estimated at $300).