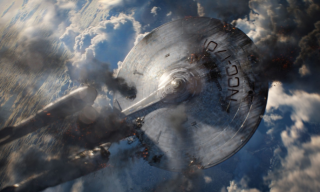 The cast and crew of the newest "Star Trek" film will open hailing frequencies with real-life astronauts in space and on the ground, and you can follow the action into the final frontier live online today (May 16).

You can watch their conversation live on SPACE.com and ask questions during the hangout by submitting questions on Google, Twitter, YouTube and Facebook by using the #askNASA hashtag.

"Cassidy will provide insights about life aboard the station," NASA officials wrote in a release. "Crews conduct a variety of science experiments and perform station maintenance during their six-month stay on the outpost. Their life in weightlessness requires different approaches to everyday activities such as eating, sleeping and exercising."

The science taking place on the International Space Station is "turning science fiction into reality," according to NASA officials.

NASA astronauts and scientists have been inspired by "Star Trek" for years. Astronauts on the final flight of the space shuttle Endeavour even used the 2009 poster for J.J. Abrams's first re-boot of the franchise to create their own mission poster.

NASA isn't the only group with a "Star Trek" themed event today. The National Air and Space Museum will host a webcast explaining "Star Trek's" relevance in the world today. Four expert panelists will discuss the ways in which the writers of the venerable TV show and movie series have used real history to craft the future world.

"Star Trek Into Darkness" is set for nationwide release today.