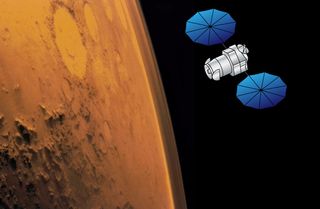 One of the two spy satellite telescopes that recently fell into NASA's lap may eventually make its way to the Red Planet.

The space agency is currently mulling potential uses for the two space telescopes, which were donated by the National Reconnaissance Office and are comparable in size and appearance to NASA's venerable Hubble Space Telescope (HST).

Some scientists have proposed sending one of the powerful telescopes to Mars orbit, where it could look both up and down, giving researchers great views of the Red Planet's surface as well as targets in the outer solar system and beyond. [Declassified U.S. Spy Satellites (Gallery)]

"We're probably not going to get a replacement for HST with UV/visible [light] and a big telescope for use at Mars," said Alfred McEwen of the University of Arizona, leader of the proposed Mars Orbiting Space Telescope, or MOST. "So this is trying to do two things with one mission."

The two donated telescopes were apparently built for a National Reconnaissance Office program called Future Imagery Architecture, which was terminated in 2005.

NASA announced in June 2012 that it had acquired the instruments, which are designed to have a much wider field of view than Hubble, despite sporting Hubble-like 8-foot-wide (2.4 meters) main mirrors.

In November, the space agency asked scientists to suggest potential uses for the NRO scopes, which are basically just primary and secondary mirrors, with no instruments attached. More than 60 serious proposals came flooding in, 33 of which — including MOST — were presented in early February at the Study on Applications of Large Space Optics (SALSO) workshop in Huntsville, Ala.

A powerful tool at Mars

As it's currently envisioned, MOST would have three main science instruments — an imaging spectral mapper, a high-resolution imager and an ultraviolet spectrometer — allowing it to make a broad range of detailed observations.

The mapper would have a spatial resolution of 0.7 feet (0.21 m) per pixel at an orbiting altitude of 250 miles (400 kilometers), McEwen said. That's about 100 times better than the resolution achieved by a similar instrument aboard NASA's Mars Reconnaissance Orbiter (MRO), which has been circling the Red Planet since 2006.

So MOST could give scientists unprecedented looks at intriguing Mars landforms, potentially shedding light on the planet's past and present ability to host life as we know it.

"This would be fantastic for things like the recurring slope lineae, which we think may be present-day flow of water on Mars," McEwen told SPACE.com. "And for ancient Mars as well — you're getting mineralogic information at much higher spatial resolution, and now you're seeing things at the scale that you can investigate in the field with rovers."

MOST's imaging instrument would be able to photograph small areas with a resolution of 3.1 inches (8 centimeters) per pixel — about four times better than MRO's HiRise instrument (which McEwen leads as principal investigator).

These capabilities could help NASA plan out future activities on the Red Planet — for example, by pinning down the best places to send a sample-return mission or set up a manned base. MOST would also likely carry a UHF antenna to relay data from Mars rovers and landers to Earth, further aiding operations at the Red Planet, team members say.

"When pointed at Mars, MOST can significantly advance our understanding of the past and present habitability of Mars, both from direct science observations and by providing critical support to robotic and potential human exploration on the surface of Mars or its moons," McEwen and his colleagues wrote in their SALSO presentation. [How the Mars-Orbiting Space Telescope Could Work (Infographic)]

MOST would also be built to look up and out, beyond the Red Planet and its two tiny moons.

The telescope's UV spectrometer is envisioned to be similar to that of the Hubble Space Telescope. But MOST likely wouldn't be able to study extremely distant objects as well as the famous HST, because installing a Hubble-like guidance and navigation system that allows a prolonged lock on such faint targets would raise the price tag significantly, McEwen said.

Instead, MOST may be optimized to view planets and moons in the outer solar system.

"We decided to emphasize bright targets, so mostly solar system targets — monitoring Jupiter, Saturn, Uranus, Neptune atmospheres, monitoring volcanism on [Jupiter's moon] Io and cloud patterns on [Saturn's moon] Titan," McEwen said. "There's an interesting variety of things you could do in planetary science with it."

A Mars-orbiting space telescope would be outside of Earth's geocorona, a wispy but luminous region of our planet's extreme outer atmosphere. And there are other advantages of placing an instrument around the Red Planet as well, McEwen and his colleagues say.

"MOST can provide a larger baseline for stereoscopic viewing of targets combined with Earth-based telescopes," they write in the SALSO presentation. "A greater range of viewing angles for targets in the outer solar system are possible from Mars than from Earth. The inner asteroid belt can be viewed from significantly closer range."

MOST would likely be far too heavy to send to Mars using traditional chemical propulsion. So a solar electric system, like the one powering NASA's asteroid-studying Dawn probe, would be employed once the telescope reached space.

Solar electric propulsion is slow but steady. It would probably take MOST 2.5 years to reach Mars, then another 2.17 years to spiral down to its final orbit, McEwen said, noting that the telescope could make science observations during the journey.

The MOST team didn't give a cost estimate for the mission. But another group, led by Zachary Bailey of NASA's Jet Propulsion Laboratory in Pasadena, Calif., estimated that it would cost about $900 million to mount a sort of de-scoped version of MOST, called High Resolution Surface Science at Mars.

McEwen said MOST would probably need a minimum of five years before it would be ready to launch.

But any talk of timelines is preliminary at the moment, because MOST, High Resolution Surface Science at Mars and the other ideas presented at SALSO are in a holding pattern.

NASA won't examine these concepts seriously until learning the results of a separate study looking into using one of the NRO scopes for the proposed Wide-Field Infrared Survey Telescope (WFIRST), a high-priority NASA mission that would probe the mysteries of dark energy and hunt for exoplanets.

The WFIRST report is due any day now; NASA officials have said the study should be completed by late April or early May.