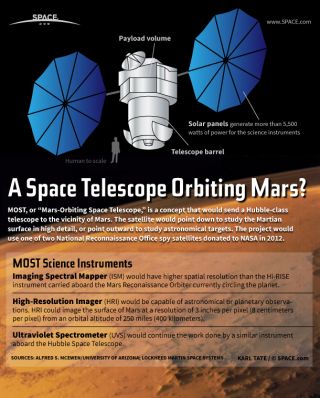 MOST, or the "Mars-Orbiting Space Telescope," is a concept that would send a Hubble-class telescope to the vicinity of Mars. The instrument would point down to study the Martian surface in high detail, or point outward to study astronomical targets. The project would use one of two National Reconnaissance Office spy satellites donated to NASA in 2012.

MOST would include three main science instruments:

The Imaging Spectral Mapper (ISM) would have higher spatial resolution than the HiRISE instrument carried aboard the Mars Reconnaissance Orbiter currently circling the planet.

The High-Resolution Imager (HRI) would be capable of astronomical or planetary observations. HRI could image the surface of Mars at a resolution of 3 inches per pixel (8 centimeters per pixel) from an orbital altitude of 250 miles (400 kilometers).

The Ultraviolet Spectrometer (UVS) would continue the work done by a similar instrument aboard the Hubble Space Telescope.

MOST's instruments would enable observation of astrophysical and planetary targets as well as Mars' surface, upper atmosphere and aurora phenomena. The mission would continue work done by NASA with the Hubble Space Telescope and would complement the capabilities of other planned space telescopes including the James Webb Space Telescope.