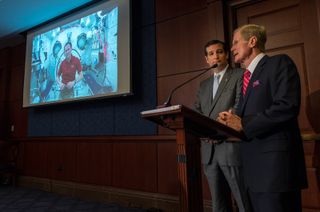 U.S. Sen. Ted Cruz, R-Texas, left, and, U.S. Sen. Bill Nelson, D-Fla., talk, via a live downlink, to NASA Astronaut Tom Marshburn onboard the International Space Station (ISS) during a NASA briefing with the U.S. Senate Committee on Commerce, Science, and Transportation, Tuesday, May 7, 2013, at the U.S. Capitol in Washington.
(Image: © NASA/Bill Ingalls)

A NASA astronaut sees his work aboard the International Space Station as a means of bringing humanity a little closer to setting foot on Mars.

During a 25-minute webcast Tuesday (May 7), members of the U.S. Senate Committee on Commerce, Science and Transportation’s Subcommittee on Science and Space asked NASA's Tom Marshburn to delve into the science, downtime and other parts of life on the space station.

"I believe I'm living and working in the first Mars vehicle," Marshburn said during the event. "Everything that we've learned here is going to be used, and needs to be used, in the next generation of [space-traveling] vehicles." [The Boldest Mars Missions of All Time]

For example, understanding how to recycle resources efficiently in Earth orbit could lead to life-support systems that help send astronauts to Mars or farther out into the solar system, Marshburn said.

"I wish every head of state around the world could come see our Earth from the cupola," Marshburn said of the Earth-observing glass structure on the bottom of the station. "It's a 360-degree view ... I've found that I've fallen in love with the Earth again. It's almost impossible to pull your eyes away from it."

Although looking out the window is one of Marshburn's favorite pastimes on the station, crewmembers are usually too busy to stare back at Earth during their work hours, he said.

Marshburn told members of the subcommittee that his days in orbit are filled with science. The astronauts are responsible for conducting more than 100 experiments on the orbiting laboratory.

But it isn't all work and no play for the astronauts.

The crewmembers hold informal competitions that are very specific to life on the space station, Marshburn added. Oftentimes the six residents of the station will try to float through a module without touching a wall just for fun.

Marshburn launched into space with Russian cosmonaut Roman Romanenko and Canadian Space Agency astronaut Chris Hadfield in December 2012. The three spaceflyers are scheduled to fly back to Earth next week on May 13