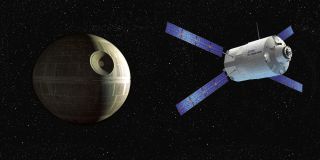 Hello space fans, and May the 4th be with you! In honor of Star Wars Day, physics professor Rhett Allain of Southeastern Louisiana University took a look at just what it would take to the build the Empire's Death Star using only the Automated Transfer Vehicle robot cargo ships built by the European Space Agency. The answer: We'll have to wait a LONG time for anything like the Death Star.

According to Allain (you can read the full post here), if humanity collectively turned to the Dark Side and opted to build the Death Star in 10 years, it would take four ATV launches EVERY SECOND to do it. If we launched one ATV a month, it would take more than 5 billion years, Allain says. So basically, the sun (and likely Earth) would be ancient history before our Death Star would be ready to take out the Rebel Alliance. The ATV is one of several cargo ships supplying the International Space Station. They are large and cylindrical and can carry about 7,200 kilograms (15,873 pounds). The next one, ATV-4 Albert Einstein, is launching on June 5.

I encourage any Death Star fan (the book by Michael Reeves and Steve Perry is worth reading, by the way) to check out Allain's full post. He went through a lot of math to figure launch rates for Death Star ATVs. He also has a nifty calculation for exactly how many people there would be on a Death Star (hint, it looks bigger than the population of Earth). Studying a real-life Death Star is not new. In January, the Obama Administration officially responded to a petition that urged the U.S. military to build a Death Star by 2016. The short answer: "The Administration does not support blowing up planets," an official said. [Read the full post at ESA's ATV Blog]