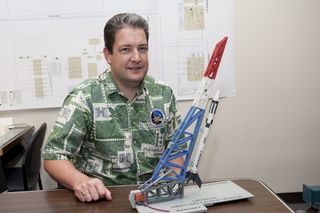 The first space liftoff from the state of Hawaii is scheduled for October to launch a satellite designed by University of Hawaii faculty and students in Honolulu.

A Super Strypi missile will loft the HiakaSat, lifting off from the U.S. Navy's Pacific Missile Range Facility on Kauai. According to officials, the 110-pound (50 kilograms) HiakaSat is a hoped-for prelude to the launch of small satellites on a routine basis.

For the state's first space launch, the University of Hawaii's Hawaii Space Flight Laboratory (HSFL) is the contractor for the launch facility, the satellite booster's three stages, and the spacecraft itself.

Luke Flynn, director of the Hawaii Space Flight Laboratory, said at the symposium  that the university would like to launch small satellites on a regular basis, thereby attracting companies looking for affordable ways to test space technology.

HiakaSat is being fabricated by HSFL faculty and students.

"Hiaka" means "to recite legends or fabulous stories" in Hawaiian. It is also an acronym for Hyperspectral Imaging, Aeronautical Kinematic Analysis — with thermal hyperspectral imaging of the Earth as one function the spacecraft will perform.

Hyperspectral imaging collects and processes information from across the electromagnetic spectrum.

The solid-fueled Super Strypi launcher is developed by Sandia National Laboratories, the University of Hawaii and Aerojet. The rocket is based on an enlarged version of Sandia's Strypi sounding rocket. The low-cost rocket uses a rail launcher and can put a payload of a little over 500 pounds (250 kilograms) into a nearly 250-mile (400 kilometer) sun-synchronous orbit.

The University of Hawaii is keen on giving students hands-on experiences in building and launching small satellites, Flynn said. Finding ways to hold down costs in developing space technology "creates a win-win for the university, for the country, for the state, and also for the corporations that are willing to invest," he said.

For HiakaSat, Kauai Community College will be the primary communications link. Honolulu Community College is designing one of the satellite payloads and will operate a receiving station during the HiakaSat mission.

University of Hawaii President M.R.C. Greenwood, giving the university a boost in the space arena, said in a statement: "Hawaii is located in a unique position to become a low-cost gateway to space. The University of Hawai'i is one of the only universities in the world to have both satellite fabrication capabilities and unique, direct access to orbital space."

Leonard David has been reporting on the space industry for more than five decades. He is former director of research for the National Commission on Space and is co-author of Buzz Aldrin's new book "Mission to Mars – My Vision for Space Exploration," out in May from National Geographic. Follow us @Spacedotcom, Facebook and Google+. Original article on SPACE.com.