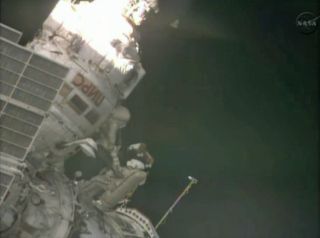 Clad in their bulky Orlan spacesuits, veteran cosmonauts Pavel Vinogradov and Roman Romanenko began their spacewalk just after 10 a.m. EDT (1400 GMT) to install a space weather experiment to the space station's hull and prepare the outpost for the arrival of a robotic cargo ship later this year. You can watch the spacewalk live on SPACE.com, courtesy of NASA TV.

"It's dark outside," one of the cosmonauts said after they opened the hatch of the Pirs docking module, which doubles as a spacewalk airlock and spacecraft parking spot at the station. [Space Station's Expedition 35 Mission in Photos]

The spacewalk's first task is the installation of a new Russian experiment called Obstanovka, which will measure charged particles interact with a variety of materials kept outside of the space station. Obstanovka could offer scientists new insights about how space weather affects the ionosphere, an active region of the Earth's atmosphere, NASA officials explained in a spacewalk description.

Vinogradov and Romanenko also plan to retrieve a Biorisk canister, an experiment that measures the effects of bacteria and fungus on spacecraft materials, as well as part of a materials exposure experiment called Vinoslivost.

"All this is hard work," Romanenko said of the spacewalk in a NASA interview before launching to the station in December. "Also I'm supposed to collect information from other experiments that were installed outside the station."

Vinogradov and Romanenko are also expected to replace a faulty retro-reflector device needed to guide the upcoming arrival of the European Space Agency's Automated Transfer Vehicle 4 — an unmanned cargo ship named "Albert Einstein." That robotic spacecraft will launch toward the space station in June and park itself at the orbiting laboratory's Russian-built Zvezda service module.

Today's spacewalk is the first for Romanenko and the seventh for veteran space man Vinogradov. Before launch, Romanenko said he was worried he would not get a chance to perform the spacewalk since he is due to return to Earth in May. He is a second-generation spacewalker; his father, former cosmonaut Yuri Romanenko, logged more than 10 spacewalking hours in his career.

The spacewalkers are two members of the six-man Expedition 35 crew currently living aboard the International Space Station. The others are Canadian astronaut Chris Hadfield, Russian cosmonaut Alexander Misurkin, and NASA astronauts Thomas Marshburn and Chris Cassidy.

This is the 167th spacewalk dedicated to the construction and upkeep of the International Space Station, which was built by five different space agencies representing 15 countries. Construction of the $100 billion space station began in 1998 and it has been permanently staffed with rotating crews since 2000. It is roughly the size of a five-bedroom house with a wingspan the size of a football field.