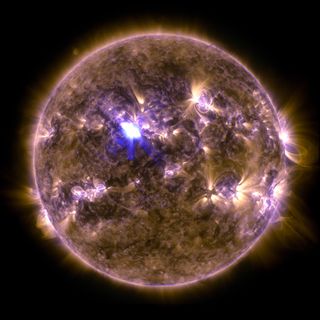 This full-disk view of the sun was captured by NASA's Solar Dynamics Observatory on April 11, 2013, during the strongest solar flare yet seen in 2013.
(Image: © NASA/SDO)

You can get a new perspective on the sun today (April 18), thanks to a special webcast devoted to our closest star.

The online Slooh Space Camera — which broadcasts footage of the night sky and celestial objects from professional-quality telescopes around the world — will host a free webcast featuring expert commentary and live views of the sun at 3 p.m. EDT (1900 GMT).

Slooh will be using views from a solar observatory in Arizona, and you can watch the solar show webcast live here on SPACE.com. During the show, experts will use the telescope to hunt for solar flares and sunspots, which should be on the rise over the coming months as our star ramps up toward a predicted activity peak later this year.

"The good news is that, sometime this year or next, and probably several times, solar outbursts will be so high that the northern lights will be seen all the way to the central United States, and maybe even farther south than that," Bob Berman of Astronomy Magazine said in a statement.

"Meantime, almost nothing is more fun than looking at the sun directly through Slooh's solar telescope and watching the violence unfold firsthand," Berman added. "This is what Slooh will be doing [Thursday] — and, with a panel of commentators, the public is invited to come take a look for themselves."

The sun's activity peak, called solar maximum, seems to have been somewhat "delayed and prolonged from its usual 11-year cycle," according to officials from Slooh. But the sun has been stirring lately.

The most powerful solar flare of 2013 erupted from Earth's closest star last week. Although it was only an M-class flare — which are considerably weaker than the most powerful type, X-class flares — the solar burp caused a short-lived radio blackout on Earth.

As the sun nears solar maximum for the current cycle, known as Solar Cycle 24, an increased number of solar flares are to be expected, scientists say.

WARNING: NEVER stare directly at the sun with your unaided eyes or through a telescope or binoculars without protection; severe eye damage, including permanent blindness, can result. Astronomers use special solar filters to safely observe the sun.