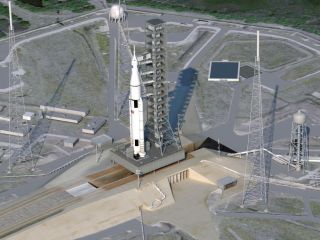 COLORADO SPRINGS, Colo. — The development of NASA's biggest, most powerful rocket yet is running ahead of schedule and on budget, its primary contractor said Wednesday (April 10).

The towering Space Launch System (SLS) is a 384-foot (117 meters) behemoth intended to launch astronauts beyond low-Earth orbit to deep-space asteroids and Mars. The vehicle is slated to make its first test flight in 2017, when it will launch an unmanned Orion capsule (also in development) beyond the moon. The first manned flight is pegged for 2021.

So far, NASA and The Boeing Co., which has been contracted to build the rocket's core stage, are on track to meet that date, officials said. [Photos: NASA's Giant Rocket for Deep Space Flights]

At the end of December 2012 — five months ahead of schedule — the team passed a milestone called preliminary design review, which certified that the rocket design meets its requirements within acceptable risk parameters. Its final technical review, called critical design review, is scheduled for 2014.

The booster, in its initial configuration, uses solid rocket boosters based on the space shuttle's design, with an upper stage taken from United Launch Alliance's well-tried Delta 4 rocket.

"The whole theory of it was to use existing hardware so we could design something relatively low-risk and get a capability soon," Elbon said.

Eventually, the SLS will have to be outfitted to carry heavier loads than its initial configuration can lift. It must carry the crew and equipment needed for a mission to Mars — which will be a multistep, complex operation. What those steps will be, exactly, is yet to be settled by NASA.

"The exploration program hasn’t been crisply defined," Elbon said. "The real focus has been on developing capabilities. I think, personally, it would be helpful if we had a mission that was clearly defined that would allow us to take these capabilities — to tailor them, define them, shape them for that mission."

Yet there's a benefit in developing SLS as a multipurpose vehicle designed to carry out more than a single mission.

"SLS is every mission beyond low-Earth orbit," said John Shannon, Boeing's International Space Station (ISS) program manager. "The fact that NASA has not picked one single mission is irrelevant."

What's key, the executives stressed, is for the United States to stay true to the goal of getting to Mars. That ambition, set by President Barack Obama during his first term, is the guiding force behind the development of SLS and Orion. If a future administration alters that objective, all bets are off.

"Constancy in purpose," is essential, said Mike Raftery, director of ISS utilization and exploration at Boeing. "This is something that happened with ISS. It needs to happen with Mars, too."