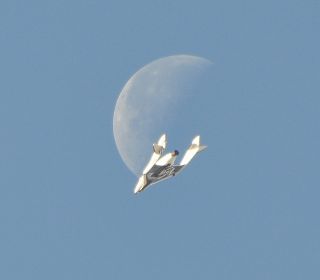 When you write about space exploration every day for more than a decade, you see a lot amazing photos of stars, galaxies, the Earth and spacecraft. But every now and then one image comes in that dares you to look away, and an amazing image of SpaceShipTwo and the moon snapped by photographer Bill Deaver last week is just that: It looks like science fiction. But this is real.

Deaver took the amazing photo on April 3, when Virgin Galactic's first SpaceShipTwo passenger space plane passed its 24th drop test with flying colors over Mojave, Calif. After 23 successful unpowered glide tests, you might think that if you've seen one, you've likely seen them all, and that is certainly what crossed my mind last week when I learned of the test. Then our story on Virgin Galactic's latest SpaceShipTwo milestone came in from our Space Insider columnist Leonard David and my jaw met the floor. Tucked in the package was Deaver's amazing shot.

"I used a Nikon D90 and Tamron 18-250 lens handheld - nothing fancy. I've been trying to get that shot for some time and this morning the 'stars' lined up just right!" Deaver told David. He also shared some comments about what watching this latest test flight was like: "The flight followed the usual pattern with the drop and glide preceded by a fuel dump from the spaceship. The weather was perfect and the wind was blowing out of the east, which meant that when the spaceship slid to a stop on its landing gear and wooden nose skid, the handful of spectators got a whiff of burnt wood!" Virgin Galactic's SpaceShipTwo is expected to begin powered flight tests sometime this year using its hybrid rocket engine. The spacecraft is designed to fly two pilots and six passengers on suborbital spaceflights for $200,000 per passenger ticket.  SpaceShipTwo and its carrier aircraft WhiteKnightTwo were developed by the Mojave-based company Scaled Composites.