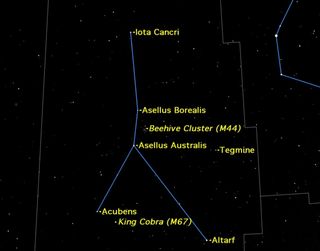 The dim constellation of Cancer, the Crab, high toward the south during the mid-to-late evening hours recently, is the least conspicuous of the 12 zodiacal constellations.

Aside from being in the Zodiac, Cancer is probably noteworthy only because it contains one of the brightest galactic star clusters in the sky. It appears to the eye as a fuzzy patch of light, but binoculars will reveal its stellar nature.

But what to call it?

Some astronomy texts speak of "Praesepe, the Manger," while others simply call this cluster the "Beehive."

A manger is defined as "a trough in which feed for donkeys is placed." The cluster was apparently first called Praesepe 20 centuries ago. Perhaps the older designation Praesepe is preferable since in the middle of Cancer are two stars called the Aselli ("donkeys") known for over 2,000 years as Asellus Borealis and Asellus Australis — the northern and southern colts — feeding from a manger. [Night Sky Observing Guide: April 2013 (Sky Maps)]

Galileo first resolved Praesepe into individual stars (36 of them) in 1610. More than 100 stars can be seen in binoculars or a small telescope, and they seem to be spread out over an area about three times the apparent diameter of the moon.

The cluster's relatively new moniker, Beehive, apparently evolved almost four centuries ago, when some anonymous person, upon seeing so many stars revealed in one of the first crude telescopes exclaimed,  "It looks just like a swarm of bees!" Hence, some astronomy books call the cluster Beehive, while others still call it Praesepe.

Interestingly, Praesepe was also used in medieval times to forecast the weather. It was one of the very few clusters that was mentioned in antiquity.

Aratus (around 260 B.C.) and Hipparchus (about 130 B.C.) called it the "Little Mist" or "Little Cloud." But Aratus also noted that on those occasions when the sky was seemingly clear, but Praesepe was invisible, this meant a storm was approaching.

Of course, we know today that prior to the arrival of any unsettled weather maker, high, thin cirrus clouds (composed of ice crystals) begin to appear in the sky. Such clouds are thin enough to dim the sun, moon and brighter stars only slightly, but apparently just opaque enough to hide a dim patch of light like Praesepe.

Because it contains no star brighter than 4th magnitude, the Crab is difficult, if not impossible, to see under a light-polluted sky.

Cancer is essentially a Greek creation. This creeping creature was sent by Zeus's jealous wife Hera to fatally bite Hercules, Zeus's son from his liaison with Alcmene. The crab arrived just as Hercules was slaying the multiheaded Hydra, one of his assigned 12 "labors."

Cancer's bite was no more than a mere annoyance to Hercules, who crushed the crab under his heel. Infuriated, Hera banished the hapless sea creature to the heavens as one of the most inconspicuous constellations. Furthermore, nearby, directly under the Crab we find the head (and only one head) of the Hydra.

To the Egyptians, Cancer was Scarabaeus, a sacred insect who was charged with rolling the sun across the sky. Roughly 3,000 years ago, the point in the sky marking the position of the June solstice lay very close to Praesepe. But thanks to precession — the "wobble" that the Earth's axis describes over an interval of 25,800 years — the solstice point has shifted out of constellation Cancer and is now located in the adjacent constellation of Gemini, having apparently slid backward toward the west over the last three millennia.

The crab is a creature that can go in one direction as well as another, so it seems only fitting that this part of the sky where the sun has seemingly reversed its direction at the beginning of summer has since been dedicated to this animal.