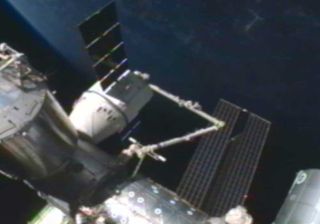 A private cargo capsule is returning to Earth from the International Space Station Tuesday (March 26), and you can watch its orbital departure live online.

You can watch Dragon depart the space station live on SPACE.com beginning at 4 a.m. EDT (0800 GMT) when undocking activities begin, thanks to a live feed provided by NASA TV.

Dragon is wrapping up its second contracted cargo run to the space station for NASA. The capsule launched on March 1 and arrived at the orbiting lab two days later after overcoming an unexpected thruster malfunction.

SpaceX officials will pluck Dragon out of the water using a crane-equipped boat and ferry it back to shore after splashdown, which was originally scheduled to take place Monday (March 25). Weather worries pushed things back a day, but the delay shouldn't affect the scientific experiments coming home with Dragon, NASA officials said.

Dragon is the only currently operating cargo vessel that can return supplies to Earth. Other robotic supply vehicles — such as Japan's HTV, Europe's ATV and Russia's Progress spacecraft — burn up upon re-entering our planet's atmosphere.

California-based SpaceX holds a $1.6 billion NASA contract to fly 12 unmanned supply missions to the orbiting lab. Dragon made its first bona fide cargo run this past October, after successfully linking up with the space station on a demonstration mission in May 2012.

NASA has also signed a $1.9 billion deal with Virginia-based Orbital Sciences Corp. to make eight unmanned cargo flights with its Antares rocket and Cygnus capsule. Antares is scheduled to make its first test flight in mid-April, and the rocket should blast Cygnus toward the station on a demonstration mission later this year if all goes well, Orbital officials have said.