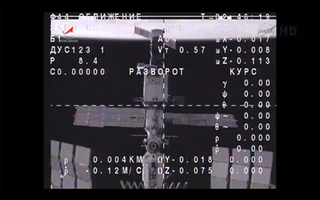 Three crewmembers from the International Space Station get a view of the orbiting laboratory as they fly back to Earth in their Russian Soyuz space capsule.
(Image: © NASA TV)

A Soyuz spacecraft has undocked from the International Space Station and is preparing to descend into Earth's atmosphere to return an American astronaut and two Russian cosmonauts back home after nearly five months living in orbit.

The undocking tonight (March 15) occurred smoothly, but one day later than planned, due to freezing rain and fog at the Soyuz's landing site on the steppes of Kazakhstan in Central Asia, which delayed the departure. Returning home on the Soyuz are NASA astronaut Kevin Ford and Russian cosmonauts Oleg Novitskiy and Evgeny Tarelkin.

The trio successfully undocked their Soyuz TMA-06M space capsule from the space station at 7:43 p.m. EDT (2343 GMT) as both spacecraft sailed high over Mongolia. Their departure marked the end of the space station's Expedition 34 mission, and the beginning of its Expedition 35 increment by three other crewmembers who remained on the orbiting lab. [See photos from Expedition 34 space mission]

The U.S.-Russian Soyuz crew is scheduled to land tonight at 11:05 p.m. EDT (0305 GMT March 16), and you can watch it live on SPACE.com courtesy of NASA. The space agency will air a live webcast of the Soyuz's deorbiting and landing beginning at 9:45 p.m. EDT (0245 GMT March 16). It will be early Saturday local time at the Soyuz landing site at the time of touchdown.

The three astronauts have spent 142 days on board the space station. This is Ford's second trip to space, but it marks the first trip for both Novitskiy and Tarelkin.

On Wednesday, Ford ceremonially passed the command of the football field sized station onto the newest commander, Hadfield. This marks the first time a Canadian astronaut has led an International Space Station crew.

"They showed us how to live in space," Hadfield said of the three astronauts heading back to Earth during the change of command ceremony.

Hadfield, Romanenko and Marshburn will not be the sole residents of the station for long. Cosmonauts Pavel Vinogradov, Alexander Misurkin and NASA astronaut Chris Cassidy are expected to arrive at the station on the same day of their launch from Earth on March 28.

If all goes as planned, it will mark the first time a Soyuz capsule has delivered a station crew to the orbiting laboratory in one day. Russia's Federal Space Agency has proven the one-day flight profile during unmanned Progress cargo ship deliveries to the space station.

NASA has relied on Russia's Soyuz crafts to transport astronauts to and from low-Earth orbit since the retirement of the agency's shuttle program in 2011. NASA officials hope to eventually depend on privately built, unmanned and crewed spacecraft to bring people and cargo to and from the space station.

The $100 billion laboratory was built by space agencies representing Japan, Canada, the United States and Russia. International crews of astronauts have continually occupied the station since 2000.