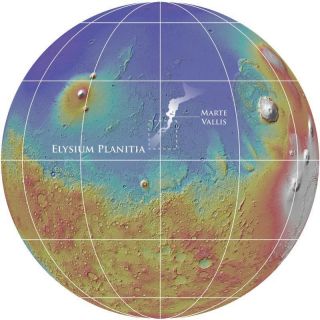 The Mars map shows the location of the nearly 1,000-kilometer Marte Vallis channel system on Mars created during an ancient mega-flood. Marte Vallis is filled with lava obscuring the source and morphology of the channels. Image released March 7, 2013.
(Image: © NASA/MOLA Team/Smithsonian Institution)

The discovery shows that a major underground channel generated by an ancient mega-flood is twice as deep as thought, and sheds light on how water shaped the surface of Mars, scientists added.

Mars today is cold and dry, with most of its water locked in polar ice caps, and researchers think its surface has been largely barren for the past 2.5 billion years. However, channels crisscrossing its surface hint that waters once flooded the Red Planet's surface.

The largest of the channels engraved into Mars within the past 500 million years belong to the 600-mile-long (1,000 kilometer) Marte Vallis system. Probing Marte Vallis could offer hints on a time otherwise thought of as cold and dry. [The Search for Water on Mars (Photos)]

However, Marte Vallis lies in Elysium Planitia, an expanse of plains along the Martian equator. This area is the youngest volcanic region on Mars, and massive volcanism throughout the past several hundred million years has covered most of its surface with lava, burying evidence of its recent history, including the source and most of the length of Marte Vallis.

Now, using the shallow radar onboard the Mars Reconnaissance Orbiter, scientists have scanned beneath the surface of Elysium Planitia. Their data helped generate a 3D reconstruction of Marte Vallis, revealing many details that lava flows buried long ago.

"This is the first time we've been able to see buried flood channels on a planet other than the Earth," lead study author Gareth Morgan, a geologist at the Smithsonian's National Air and Space Museum, told SPACE.com.

The researchers found the channels of Marte Vallis were at least 230 feet (70 meters) deep, making them at least twice as deep as thought.

"That shows previous ideas of erosion, of how much water have gone through Marte Vallis, have been underestimated," Morgan said. "There was more significant flooding than before thought, and it's interesting to think of where this water might have come from during this relatively dry period."

"The source of the floodwaters suggests they originated from a deep groundwater reservoir and may have been released by local tectonic or volcanic activity," Morgan said.

Marte Vallis is similar to more ancient systems of channels on Mars. The gargantuan floods that generated these channels may also have briefly radically changed the Red Planet's climate just as giant floods of Arctic water have on Earth. Learning more about Martian floods could provide information on key parts of that world's history, researchers said.

"There's also evidence of channels buried by lava or other sorts of materials in other areas on Mars, and we'd like to apply the same sort of radar studies to those," Morgan said.

The scientists detailed their findings online today (March 7) in the journal Science.