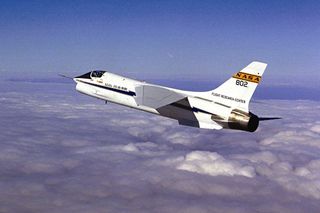 This control system was extensively tested before wide-spread use began.
(Image: © NASA.)

In this historical photo from the U.S. space agency, an F-8C with the Digital-Fly-By-Wire Control System, which was first tested in 1972, is shown during a test flight. The use of electrical and mechanical systems to replace hydraulic systems for aircraft control surface actuation was flight-tested.