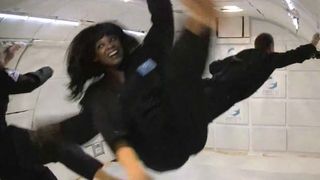 Coco Brown could become the first adult film actress launched into space, according to press reports.

Brown has apparently booked a seat aboard a suborbital private space plane for a March 2014 mission arranged by the space tourism company Space Expedition Corporation (SXC).

Brown is set to fly nearly 62 miles (100 kilometers) above the Earth's surface in the SXC mission, the Huffington Post reported.

SXC plans to launch passenger flights into suborbital space from the Caribbean island of Curacao using the two-person Lynx space plane under development by the commercial spacecraft company XCOR Aerospace based in Mojave, Calif. The spacecraft is designed to fly one passenger and one pilot to the edge of space and back for a ticket price of about $95,000. [Photos: XCOR Aerospace's Lynx Space Plane]

SXC and XCOR officials have taken more than 175 reservations for the flights so far. XCOR Aerospace officials have said that they expect to begin the first test flights of the first Lynx prototype sometime in 2013.

Before Brown can climb on board the rocket, however, she has to complete an intensive training program that includes zero-gravity exercises, simulated G-forces, and a flight aboard a plane that mimics the way blast off, weightlessness and re-entry feel when in a rocket.

"It's great to have people join us from all kinds of industry," Van Pelt told the news organization. "We make space accessible for everyone."

Whether Brown will combine her chosen profession with her love of spaceflight remains to be seen.

If Brown does decide to film a pornographic movie in zero gravity, she won't be the first. Twenty seconds of the adult film, "The Uranus Experiment: Part 2" were filmed in actual weightlessness created when a plane flew 11,000 feet (3,353 meters) into the air and then did a steep dive, creating the sensation of weightlessness.

Recently, Space Expedition Corp. made news in the space tourism industry for other reasons. The corporation has partnered with Axe body spray creators Unilever and XCOR to send 22 contest winners from around the world into space aboard a Lynx space plane.

The companies announced the first winner picked to attend the Axe Apollo Space Academy — a camp that will train winners before blasting off into orbit — after the Super Bowl last Sunday (Feb. 3).