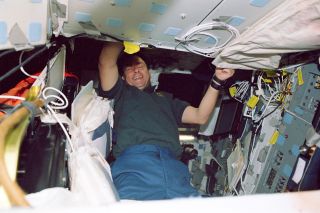 The space shuttle Columbia is largely remembered for the catastrophic accident that destroyed the orbiter and took the lives of seven astronauts on Feb. 1, 2003. But that ill-fated mission was also an instrument of hope when Israel's first astronaut flew a small Torah scroll from the Holocaust to space with him.

"Our documentary follows the trail of the scroll from Bergen-Belsen [concentration camp] to Columbia," said Daniel Cohen, the film's director. "This story will suck you in — that's what it did to me. It's a pretty powerful story."

When Columbia launched on its STS-107 mission on Jan. 16, 2003, it carried seven astronauts, including Ilan Ramon, a fighter pilot and payload specialist from the Israeli Space Agency who was the first person from his nation to reach space. Also flying on the mission were commander Rick Husband, pilot Willie McCool and mission specialists Michael Anderson, Laurel Clark, David Brown and Kalpana Chawla.

Ramon's mother and grandmother were both survivors of Auschwitz, Germany's largest concentration camp during World War II; his father's family fled Nazi persecution in Germany just before the war.

Before his flight to space, Ramon learned about a miniature Torah scroll that had been used in the secret bar mitzvah (the ceremony that recognizes a Jewish boy's coming of age) of Joachim "Yoya" Joseph, who was a prisoner at age 13 in Bergen-Belsen. A rabbi had taught him the Hebrew prayers in secret and performed the ritual early one morning in the camp, while other prisoners put blankets over the windows and guarded the doors of their barracks. Joseph survived the war and went on to become an Israeli scientist who worked with Ramon on the Columbia mission. [Photos: The Columbia Space Shuttle Tragedy]

Ramon asked Joseph for permission to carry his scroll to space as a tribute to his country and the victims of the Holocaust.

"He knew the importance of the personal objects astronauts carry with them to space," Cohen told SPACE.com. "As the son and grandson of Holocaust survivors, he felt that the Holocaust was very important. His mission was to show the world who he was and where he was from, and that's so woven through by the Holocaust."

With the blessing of Joseph, Ramon took the scroll with him to space, along with a sketch of the moon drawn by a 14-year-old who died in Auschwitz, a microfiche copy of a Torah given to him by Israel's president Moshe Katsav, and a barbed wire mezuzah (a prayer meant to be affixed to a doorframe) given to him by a Los Angeles Holocaust survivors group. While in space, Ramon displayed the scroll and other items during a televised call down to Earth.

Cohen has been working on the film since shortly after the Columbia accident. Its premiere now comes the day before the 10th anniversary of the disaster.

The film incorporates some footage shot by Ramon's Columbia crewmate David Brown, who documented the days before and during the flight and was one of the seven astronauts to die in the shuttle's accident.

"The best way for me to leave a legacy for David is for him to tell his own story through his footage," Brown's brother Doug Brown told SPACE.com.

"I see that [Cohen] believed in this story and he very much wanted to tell it," Brown said. "He dedicated a great part of his life to that. I think the film is highly professional."

The film was produced by Christopher G. Cowen and Herzog & Company/HCO and West Street Productions, and is presented by the film production company Playtone. Tom Hanks, Gary Goetzman and Mark Herzog served as executive producers.