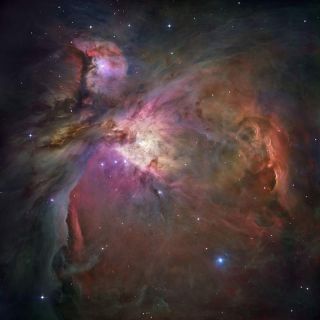 This new Hubble image of the Orion Nebula shows dense pillars of gas and dust that may be the homes of fledgling stars, and hot, young, massive stars that have emerged from their cocoons and are shaping the nebula with powerful ultraviolet light.
(Image: © NASA, ESA, M. Robberto (Space Telescope Science Institute/ESA) and the Hubble Space Telescope Orion Treasury Project Team)

WASHINGTON, D.C.-Scientists have created the most detailed portrait ever of the closest known star factory, the Orion Nebula. They have also uncovered new details about the stellar winds responsible for carving out the nebula's ghostly shapes.

Meanwhile, another research group identified a glowing gas cloud in another region of the night sky that might replace Orion when it fades from view in about 100,000 years.

The findings were announced here at the 207th meeting of the American Astronomical Society.

Orion is located 1,500 light-years away and is the nearest region of massive star-formation to Earth. Located at the center of the Orion Nebula is a group of four young, massive stars; they are collectively referred to as the "Trapezium" because of the shape they make. The Trapezium is surrounded by a halo of 1,000 faint, low-mass stars similar to the Sun.

Like all massive stars, those in the Trapezium are radiating a stream of energetic X-rays called a stellar wind. However, the wind from the Trapezium is millions of times denser and more energetic than the flow from our own Sun.

When these powerful winds collide with the dense cloud of dust and gas surrounding the stars, they produce shock waves that erode and shape the clouds. Similar to how winds on Earth can sculpt sand dunes in a desert, stellar winds from the Trapezium are carving out a relatively dust and gas free cavity filled with strange, ethereal scenes.

"In this bowl of stars we see the entire formation history of Orion printed into the features of the nebula: arcs, blobs, pillars, and rings of dust that resemble cigar smoke," said Massimo Roberto, an astronomer at the Space Science Telescope Institute in Baltimore. "Each one tells a story of stellar winds from young stars that impact the environment and the material ejected from other stars."

Roberto is part of a team that stitched together more than 500 highly detailed images taken by the Hubble Space Telescope to create the sharpest portrait of Orion ever produced. The image includes stars that are one hundredth the brightness of any previously viewed and others that have never before been photographed in visible light.

"Orion may seem very peaceful on a cold winter night, but in reality it holds very massive, luminous stars that are destroying the dusty gas cloud from which they formed," said Tom Megeath, an astronomer at the Harvard-Smithsonian Center for Astrophysics.

The Trapezium's stellar winds play a major role in the creation of new stars within the Orion Nebula. If the winds are strong enough, their shockwaves act as catalysts for star formation by pushing the clouds together into compact bundles.

"When you look closely, you see that the nebula is filled with hundreds of visible shock waves," said Bob O'Dell, an astronomer from Vanderbilt University.

O'Dell used Hubble to map Orion's stellar winds with unprecedented detail; he discovered that the shockwaves can have different shapes, depending on whether the dust and gas clouds were moving or stationary when the winds passed through. He also found that stellar winds can collide with one other, producing yet another unique shockwave shape.

By looking at the orientation of the shockwaves, O'Dell was also able to determine the direction the winds blow within the nebula.

O'Dell combined all of this information to create a map of the stellar winds in two of Orion's three star forming regions and found that some of the winds have been blowing continuously for nearly 1,500 years.

Put this on your calendar

The Trapezium's winds are doing such a thorough job of carving up its cloudy cocoon that in about 100,000 years, the Orion Nebula as we know it will fade from view, scientists say.

Stargazers of the future need not despair, however, because astronomers have discovered a gas cloud in the constellation Cassiopeia that has just begun shining with newborn stars. Known as W3, the cloud will become the Grand Nebula and replace Orion as Earth's most visible stellar nursery just as Orion disappears.

"The Grand Nebula in Cassiopeia constellation will appear in our sky just as the Great Nebula in Orion fades away," Megeath said.

Megeath is part of the team that discovered the Orion successor. Using two telescopes-the Hubble and the Very Large Array-the researchers discovered that W3 even contained its own version of the Trapezium made up of four or five massive stars.

The so-called proto-Trapezium stars are much younger than those found in Orion and appear to still be growing by accreting gas from their surrounding clouds.

The discovery of these stars may resolve a debate among scientists about how Orion's Trapezium formed in the first place. The Orion Nebula and the Trapezium within are of special interest to astronomers because it is believed that our own Sun was born in such an environment.

According to one Trapezium formation hypothesis, each of the four massive stars formed separately but then descended into the center of the nebula to form a clump. Another leading hypothesis is that the Trapezium stars never moved at all and formed together right where they are.

Because the proto-Trapezium stars in W3 are clustered together, Megeath's team suspects that the second hypothesis is correct.

When they mature, the proto-Trapezium stars will emit their own, powerful stellar gusts and ultraviolet light and carve out their own spectral skyscapes. Scientists are uncertain when this process will be complete or when the stars will reach their maximum brilliance, but think that it may around the time that Orion is scheduled to disappear.

"Who knows, in 100,000 years the emerging Grand Nebula in Cassiopeia may replace the fading Orion Nebula as a favorite object for amateur astronomers," Megeath said.