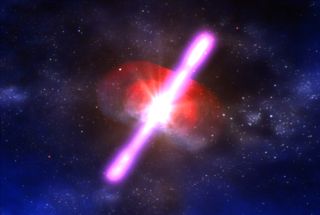 An illustration of a gamma-ray burst, the most powerful explosion type yet seen in the universe.
(Image: © NASA/D.Berry )

Light from some of the universe's most energetic explosions is allowing scientists to probe the nature of space-time, according to new observations of so-called gamma-ray bursts from the Japanese Aerospace Exploration Agency's Ikaros spacecraft. Photons released by these bursts help place limits on a unified model of all of the forces of nature — what scientists call a "theory of everything."

Using the Gamma-Ray Burst Polarimeter (GAP) onboard the spacecraft, a team of Japanese scientists have made the most precise measurements of energetic gamma-ray burst photons to date.

"This result puts a fundamental constraint on quantum gravity, a dream theory reconciling Einstein's theory of relativity and quantum theory," Kenji Toma, of Osaka University, said in a statement.

Gamma-ray bursts are exceptioinally powerful explosions thought to result from violent events like star deaths and collisions of dense neutron stars. Toma and his team used detailed measurements of gamma-ray bursts to study the properties of the photons and determine their polarization, or how their electric fields are oriented in relation to the motion of the particles. The electric field of polarized light bounces up and down on an axis perpendicular to the direction the photons travel in. [5 Reasons We May Live in a Multiverse]

"Most 3D projection systems in movie theaters project two versions of the movie at two different polarizations — both at 45 degrees to the horizontal, but perpendicular to each other — so that when you view the movie through appropriately polarized glasses, the left eye sees the version of the movie meant for the left eye, and the right eye sees the version meant for the right," astrophysicist Derek Fox of the University of Pennsylvania told SPACE.com by email. Fox was not part of the team behind these findings, but studies gamma-ray bursts like those observed in this case.

The findings could have implications for superstring theory — the idea that all fundamental particles are actually loops of vibrating string — which is one attempt to unify nature's forces and create a theory of everything. If the idea is right, it would help reconcile two contradictory theories: Einstein's general relativity, which describes things that are very big, like gravity, and quantum mechanics, which describes the realm of the very small.

"We live in a quantum universe — quantum mechanics is needed to describe the behavior of all forces and all particles at the subatomic level," Fox said. "Ultimately, we can hope to develop a 'quantum gravity' theory of these phenomena."

Superstring theory scientists predict that if particles and anti-particles (antimatter is an opposite form of normal matter) traded places and time was reversed, the world would still look the same. If any evidence is uncovered that matter and antimatter actually act differently, or violate their apparent symmetry, it could offer support for superstring theory.

"If it were proven to be violated by any physical process, even at some tiny level, then this would radically change the direction of current theoretical approaches to constructing a unified model of all the forces of nature," Fox said.

Collecting observational evidence can prove challenging, as many quantum structures are too small to probe with present-day technology on Earth, making a space-based probe a necessity.

Photons streaming from gamma-ray bursts have thus far shown no changes in the rotation of their polarity. Such a rotation would indicate a lack of symmetry if time were reversed and particles and anti-particles switched.

Studying three gamma-ray bursts with significantly more precision than ever before, Toma and his team found no change in the polarization of the photons, implying that the symmetry is consistent to at least one part in 10 million. This is a new record in constraining the rules that govern nature, and will influence attempts to create a unified theory.

The research will be published in an upcoming issue of the journal Physical Review Letters.

Gamma-ray bursts are brief spikes that can last from a few seconds to a few minutes. The light from them can travel billions of light-years in the form of streaming high-energy photons that are unable to penetrate Earth's atmosphere.

Emitting as much energy in a few seconds as the sun does in a lifetime, the explosions may come from flare-ups during the formation of a neutron star or black hole — two possible outcomes of star deaths — or the sudden collision of neutron stars. The powerful forces involved in such events accelerate photons almost to the speed of light.

"Gamma-ray bursts have relatively high energies — compared to, say, radio or optical photons — which make them useful probes of the possible quantum structure of space-time," Fox said. He went on to call them "a natural choice as target sources for these tests."

Launched in May 2010, Ikaros is the first spacecraft outfitted with a solar sail. GAP is positioned at the probe's back end, pointing away from the sun and into deep space.