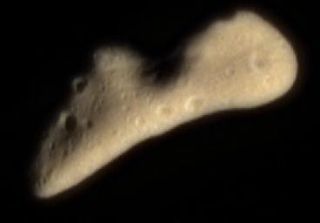 This color image of Eros was acquired by NEAR's multispectral imager on February 12, 2000, at a range of 1100 miles (1800 kilometers). It is part of the final approach imaging sequence prior to orbit insertion and is intended to map the color properties of Eros across all of the illuminated surface.
(Image: © NASA/JPL/JHUAPL)

It sounds like the plot of a bad Bruce Willis movie, but some experts are saying it should be a reality.

In order to prepare for massive asteroids that could aim for Earth in the future, researchers should ram a spaceship into a real asteroid to see if the space rock would shift course, scientists say.

The proposal, which was presented Wednesday (Dec. 5) at the annual meeting of the American Geophysical Union, would send two spaceships to deflect a small asteroid in a binary (double asteroid) system coming toward Earth in 2022. One spaceship would crash into the asteroid, hopefully deflecting it, while another would observe the collision.

"This is the biggest problem for planetary defense," said Andrew Cheng, a physicist at the Applied Physics Laboratory at Johns Hopkins, who is proposing the space mission. "There is a risk if we saw an asteroid coming towards us, we wouldn't know if we could do anything about it." [When Space Attacks: The 6 Craziest Meteor Impacts]

Meteor impacts are rare, but they have devastated Earth several times in the planet's history. For instance, many scientists think a giant meteorite impact caused the massive extinction of the dinosaurs about 65 million years ago.

But while powerful space probes and telescopes can now see asteroids barreling toward Earth from far away, there's no real plan for stopping a giant one from wiping out humanity. While some have suggested bombarding asteroids with giant paintballs, or nuking an asteroid, Armageddon-style, very few of these schemes have been tested. NASA recently announced funding for a potential manned mission to an asteroid, slated for 2025.

In 2005, the European Space Agency floated a half-baked "Don Quijote" plan to aim a spacecraft into an asteroid to deflect it. But the plan targeted a very large asteroid that was pretty far away, making it both expensive and unlikely that scientists on the ground could actually measure the asteroid's deflection.

Instead, Cheng and his colleagues are betting that aiming at a small and close asteroid may be more feasible. Their goal is to crash into the smaller rock in a binary asteroid system called Didymos that is projected to travel past Earth in 2022.

"We are targeting the smaller member of the binary," Cheng told LiveScience. "That will change the orbit of the system and that can be measured."

Because the asteroid is relatively modest-sized, about 500 feet (150 meters) wide, the spacecraft would be able to move it noticeably from its regular orbit, allowing the scientists to measure how much the spacecraft shifted the space rocks from their course. Since it will be just 6.5 million miles (10.5 million kilometers) from Earth, scientists can measure the deflection from the ground using telescopes, he added.

How it would work

Cheng's team is proposing that NASA use a 600-pound (300 kg) spaceship to ram into Didymos, while another spacecraft funded by the European Space Agency, called the Asteroid Impact and Deflection Assessment (AIDA) would monitor the collision. Cheng's team has already applied to NASA for money to develop the idea, while a concept study for the ESA project is already funded, he said.

Testing the asteroid deflection on a binary system is smart, said Franck Marchis, an astronomer at the SETI Institute, who is not involved in the proposal.

"It's a perfect idea because the perturbations are more easily measured," Marchis told SPACE.com.

Even if successful, the deflection may not tell scientists whether a spacecraft could deflect a larger or different type of asteroid.

But this is just a first step, Cheng said.

"You've got to start somewhere."