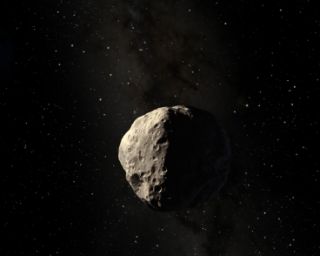 An epic battle between paintballs and a giant asteroid could one day save the Earth from an apocalyptic space rock impact.

The novel asteroid-deflecting scheme proposes that a cloud of paintballs shot into space could knock a dangerous asteroid off a collision course with Earth.

Sung Wook Paek, an MIT graduate student, says a spacecraft could fire two rounds of pellets full of white paint powder at an asteroid to cover as much of the rock's surface as possible. The strategy, unveiled Friday (Oct. 26), won the 2012 Move an Asteroid Technical Paper Competition, sponsored by the United Nations' Space Generation Advisory Council.

The initial force from the paintballs would nudge the asteroid slightly off course, Paek says. And the pale paint job resulting from the splattered pellets would more than double the space rock's sunlight reflectivity. More photons bouncing off the asteroid's surface would enhance solar radiation pressure and bump it further off course.

The asteroid Apophis was used as a theoretical test case in Paek's proposal. The 900-foot-wide (270-meter) asteroid is perhaps the most often cited as a potential candidate for impacting Earth sometime in the next few decades. Observations suggest it may come close to Earth in 2029, and then again in 2036.

Five tons of paint would be required to cover Apophis, according to Paek's calculations. He also estimated that it would take up to 20 years for enough solar radiation pressure to successfully pull it off its Earth-bound trajectory.

Paek, who is studying aeronautics and astronautics, says his strategy could be used to shoot other substances besides paint at a space rock.

The pellets could be packed with aerosols that would "impart air drag on the incoming asteroid to slow it down," he said in a statement. "Or you could just paint the asteroid so you can track it more easily with telescopes on Earth. So there are other uses for this method."

Researchers have been dreaming up ways to drag asteroids off their orbits in case we're ever facing an "Armageddon"-like situation. Other plans that have been proposed involve gravity tractors, laser beams, impactors and even nuclear bombs.

Paek's work builds on last year's winning proposal, which involved deflecting an asteroid with a cloud of solid pellets.

"It is very important that we develop and test a few deflection techniques sufficiently so that we know we have a viable 'toolbox' of deflection capabilities to implement when we inevitably discover an asteroid on an impact trajectory," Johnson said in a statement.

Editor's note: This article was corrected on Nov. 11 to clarify that the Messenger spacecraft was able to use solar sails to change its trajectory during the cruise phase of its mission, but now that it is in orbit around Mercury, it can no longer use solar sails as was originally stated.