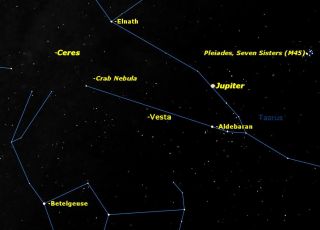 On the morning of Sunday December 9, The brightest asteroid Vesta will be in opposition to the Sun, close to the bright planet Jupiter.
(Image: © Starry Night Software)

On Sunday (Dec. 2), the giant planet Jupiter reached opposition with the sun, lining up directly opposite the sun in the sky. That means it's a great target for stargazers, who can see it shine brightly all night long this week.

Within the next two weeks, two more solar system bodies will also reach opposition right alongside Jupiter: Vesta and Ceres.

Seven years ago, these would be described as the solar system's two largest asteroids, which are a large group of small bodies whose orbits mostly lie between the orbits of Mars and Jupiter.

But in 2006, the International Astronomical Union, the governing body of astronomy, reclassified Ceres as a dwarf planet, grouping it together with Pluto and other Kuiper Belt objects. Many astronomers still classify Ceres as an asteroid, even though at 592 miles (952 kilometers) in diameter, it is almost twice as large as the next largest asteroids, Pallas (326 miles, or 524 km), and Vesta (319 miles, or 513 km.). It is also round in shape, while most asteroids are irregular potato shapes. [Photos: Asteroid Vesta]

The two charts below are snapshots of the same area of sky as it will appear on Dec. 9 and Dec. 18. All the background stars are the same in both views, but the three solar system bodies, Jupiter, Vesta, and Ceres, all jump slightly to the right between the two views.

Asteroids get their name partly because of their small size, as they are all too small to appear to us as anything other than stars in the night sky. They give themselves away only by their motion, which reveals they are not actually stars, but something much closer.

Both Vesta and Ceres are slightly too faint to be visible with the naked eye, but both are easily visible in binoculars. If you observe them even a day apart, you will be able to see their movement against the background stars.

Both these objects are currently being studied up close by NASA's Dawn spacecraft. Dawn was launched on Sept. 27, 2007 and arrived at Vesta on July 16, 2011. It spent just over a year studying Vesta, and then left on Sept. 5 of this year for Ceres. It will arrive there in February 2015 and spend at least a year in orbit.