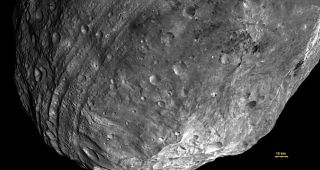 Vesta used to be round—until it got hit by something nearly one-tenth its size. The resulting impact basin, named Rheasilvia, fills most of this image, taken from some 5,200 kilometers away. Vesta’s south pole lies in the mountains at lower right, while the parallel grooves at left (also created by the impact) run roughly along the equator.
(Image: © NASA/Caltech)

Out between Mars and Jupiter lies a rubble of planets that never quite formed. Although the asteroids date to the birth of our solar system, our closest looks at them have been glimpses from spacecraft whizzing by en route to the glamorous outer solar system.

In May, a set of six papers describing the Dawn team’s initial findings were published in the journal Science.

The headline news is that Vesta has a substantial nickel-iron core, just like Mercury, Earth, and Mars — a radical notion first proposed in 1970 by Dawn co-investigator Tom McCord. McCord (then at MIT), along with MIT researcher Torrence Johnson and JPL’s John Adams, took detailed spectra of Vesta’s surface and discovered it was entirely basalt, a type of frozen lava. [Photos: Asteroid Vesta and NASA's Dawn Spacecraft]

If Vesta had gotten that hot, the scientists reasoned, its heavy elements would have melted and sunk to the core in a process called differentiation — a key step on the road to planethood. In fact, joked JPL’s Carol Raymond, Dawn’s deputy principal investigator, "We like to call Vesta 'the smallest terrestrial planet.'" Raymond’s gravity data put its core at about 18 percent of Vesta’s total mass, or proportionally about two-thirds as massive as Earth’s core.

Dawn’s mapping spectrometer has verified an even wilder conjecture from the 1970 paper: Vesta is indeed the source of the howardite-eucrite-diogenite (HED) meteorites found on Earth and Mars.

The Dawn team thinks the HEDs came from an impact basin the team has named Rheasilvia, after an ancient Roman vestal virgin priestess.

Counting the craters within Rheasilvia gives it an age of about 1 billion years, surprisingly recent for something so big. At 310 miles (500 kilometers) in diameter, Rheasilvia is nearly as large as Vesta itself, and is the result of a collision that stripped away most of the crust from the southern hemisphere, baring Vesta’s interior like a clumsily peeled orange.

Rheasilvia doesn’t represent Vesta’s only near-death experience. Dawn found a second basin, nearly as big and a billion years older, sticking out from under Rheasilvia. This basin, named Veneneia (for another vestal virgin), is also a potential source of HED meteorites.

This article was provided by the California Institute of Technology's quarterly magazine "Engineering & Science."