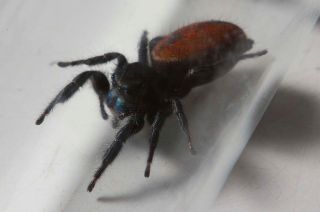 The Smithsonian's exhibition of the first jumping spider to survive the trip to space has turned out to be short lived: The arachnid astronaut died just days after going on display.

"It is with sadness that we announce the death of Nefertiti, the 'Spidernaut,'" the staff at the Smithsonian Institution's National Museum of Natural History in Washington, D.C. wrote on Facebook Monday (Dec. 3).

The "Johnson Jumper" ("Phidippus johnsoni") spider was launched to the International Space Station (ISS) in July as the subject of a student-initiated science experiment. Part of YouTube Space Lab, an online video contest, the spider's spaceflight was the idea submitted by 18-year old Amr Mohamed from Alexandria, Egypt.

Living aboard the orbiting laboratory for 100 days, Nefertiti, named in honor of Egypt's ancient queen, demonstrated that that its species was able to adapt its feeding behavior to account for the effects of weightlessness and still catch its prey. It then successfully readjusted to gravity, after its return to Earth in October. [Video: Venomous Spiders on Space Station]

Its space mission over, Nefertiti was moved to the Natural History Museum late last month. It was introduced to the museum's visitors on Nov. 29 inside the "Insect Zoo," an exhibit gallery where other live arachnids and insects are regularly available to observe.

"This morning [Dec. 3], before museum hours, a member of the Insect Zoo staff discovered Neffi had died of natural causes," the museum wrote Monday evening. "Neffi lived for 10 months. The lifespan of the species ... can typically reach up to one year."

The spider's spaceflight and subsequent brief exhibit drew wide interest by the press and the public. NASA astronaut Sunita Williams, who commanded the space station while Nefertiti was onboard, provided updates about the spider's status through a blog on NASA's website.

The Smithsonian said that the loss of Nefertiti, "a special animal that inspired so many imaginations," would be felt throughout the museum community.

Though Nefertiti's exhibition at the Insect Zoo has ended, it will continue to live on at the Smithsonian. Its body will be added to the museum's specimen collection.

"[Nefertiti] will continue to contribute to the understanding of spiders," the museum reported.

Other space-flown spiders have met similar fates, entering the Smithsonian's collection posthumously. "Arabella" and "Anita," the first spiders to spin webs in space, both died while on the United States' first space station, Skylab, in 1973. A year later, after they were returned to Earth, they were donated by NASA to the Smithsonian's National Air and Space Museum for display.