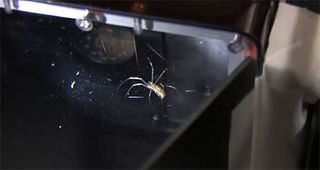 This still from a NASA video shows one of two venemous golden orb spiders in an enclosure on the International Space Station. The spiders, Gladys and Esmerelda, were delivered to the station by NASA's shuttle Endeavour during the STS-134 mission in May 2011.
(Image: © NASA)

They say that pretty much everyone on Earth is never more than a few yards from a spider at any time. And now the same goes for astronauts in space, too.

A pair of golden orb spiders hitched a ride to the International Space Station on the shuttle Endeavour's final launch last week as part of an experiment. The two eight-legged "arachnidnauts"— which the station crew calls  Gladys and Esmerelda — are settling in nicely aboard the orbiting lab, already weaving webs in their weightless new home. [Video: Venomous Spiders on Space Station]

And that's the idea. Gladys and Esmerelda are part of a 45-day study to see how microgravity affects spiders' behavior, especially their ability to spin nice fly-catching webs.

"So, ready to understand how spiders spin webs in space," NASA astronaut Cady Coleman said in a recent video from the space station, as she showed off the spiders' suitcase-size living quarters. "It'll be great."

Like virtually all spiders, Gladys and Esmerelda are venomous. However, their species, which is widespread throughout the Americas, is not considered dangerous to humans.

Spider food in space, too

Accompanying the spiders on their space odyssey is a swarm of fruit flies. While these luckless insects will be dinner for Gladys and Esmerelda, scientists will also be noting how weightlessness affects the flies' development and behavior.

So far, the experiment appears to be going well.

"Both Esmerelda and Gladys are looking healthy, and have both spun webs," NASA officials said in a status report on May 21. "The fruit flies are also healthy and a good colony appears with flies, pupae and larvae. The science is progressing well and as expected."

A history of spiders in space

Gladys and Esmerelda aren't the first spiders in space. That honor goes to Arabella and Anita, two cross spiders that traveled to NASA's Skylab space station in 1973. After some initial difficulties, Arabella eventually spun a decent space web, though it was less robust than a typical Earth offering.

The bodies of Anita and Arabella — tiny, brittle pieces of space history — are preserved at the Smithsonian Air and Space Museum in Washington, D.C.

Eight golden orb weaver spiders also went up with Columbia on the shuttle's tragic STS-107 mission in 2003. Columbia and its seven-astronaut crew were lost when the orbiter disintegrated upon re-entry to the Earth's atmosphere due to heat shield damage.

And the spiders delivered to the space station this month aren't the first ones to fly on space shuttle Endeavour.

During the Endeavour's STS-126 mission in 2008, the shuttle played the role of arachnid taxi for the first time, ferrying two orb weavers to the space station for some web-spinning experiments — the first true spider science ever performed aboard the $100 billion orbiting lab.

Endeavour's current mission is STS-134 is its final flight before being retired along with the rest of NASA's fleet later this year. The 16-day spaceflight included four spacewalks and delivered a $2 billion astrophysics experiment, called the Alpha Magnetic Spectrometer, and other supplies to the space station. [Last Chance to See Space Shuttle Endeavour in Night Sky]

Endeavour will leave the space station late Sunday (May 29) and is due to land June 1. After the flight, the orbiter will be retired to a museum in California as NASA winds down its 30-year shuttle program.