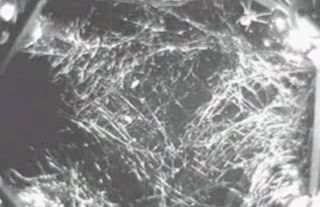 A view of one of two orb weaver spiders (upper right) and its web aboard the International Space Station as part of an educational science experiment. The spiders were delivered by NASA's shuttle Endeavour during the STS-126 mission in Nov. 2008.
(Image: © NASA TV.)