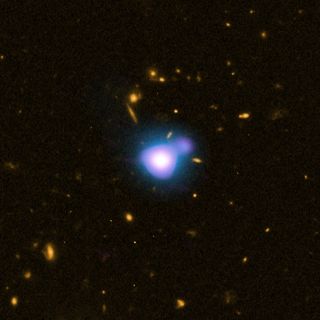 The most distant black hole X-ray jet ever observed has been discovered some 12.4 billion light-years from Earth, giving astronomers a peek at the life of giant black holes not long after the Big Bang.

The enormous stream of radiation, which is believed to stretch about twice the diameter of the entire Milky Way, is the byproduct of a quasar— a galaxy dominated by a supermassive black hole in its center. Huge black holes like this become extremely bright when they rapidly suck in matter and then hurl beams of high-energy particles back into space.

These particles travel at nearly the speed of light and can interact with cosmic clouds of photons left behind after the Big Bang. This interaction ratchets up the photons' energy, pushing it into the X-ray band of light, which results in a bright jet of radiation, as researchers have observed in an object designated quasar GB 1428.

"Since the brightness of the jet in X-rays depends, among other things, on how fast the electrons are moving away from the black hole, discoveries like the jet in GB 1428 tell us something about the environment around supermassive black holes and their host galaxies not that long after the Big Bang," Lukasz Stawarz, of the Japan Aerospace Exploration Agency, explained in a NASA statement.

The faraway jet, spotted with data from NASA's Chandra X-ray Observatory, appears to observers on Earth as it was when the universe was about 1.3 billion years old. At that time, the sea of ambient photons throughout the universe was much more intense than it is now, which makes this jet brighter and helps the light emitted from it overcome dimming, the researchers say. [Black Hole Quiz: Test Your Knowledge]

"We're lucky that the universe gives us this natural amplifier and lets us detect this object with relatively short exposures. Otherwise we might miss important physical processes happening at very large distances from Earth and as far away as GB 1428," another astronomer involved in the study, Aneta Siemiginowska, of the Harvard-Smithsonian Center for Astrophysics, said in a statement.

The researchers note that electrons spiraling around magnetic field lines in the jet could be an alternative source of X-rays. But since the blast is so bright, the team says it favors the explanation that the stream of particles is amplifying the cosmic background radiation.

Previously, the most distant X-ray jet known to astronomers was 12.2 billion light years away.

The research was detailed in the Sept. 1, 2012, issue of The Astrophysical Journal Letters.