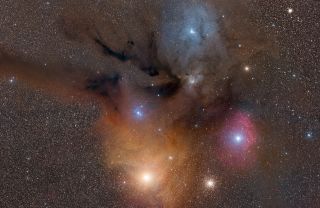 Brilliant colors swirl and glow in the Rho Ophiuchi Nebula, as seen in this beautiful night sky image.

Astrophotographer Tom O'Donoghue moved from Ireland to Spain to begin imaging this stunning nebula in the summer o f 2011. Twenty-five nights and two summers later, the image was completed.

"I originally took 30 hours of exposures for this picture in 2011, but there were gradients due to low-lying cloud and moisture that meant entire frames of the five frame mosaic needed to be re-shot," O'Donoghue said. "I had to wait until this summer to obtain another 30 hours. All together this picture took 25 nights over two summers to complete.”

The night sky between the bright star Antares and the Rho Ophiuchi nebula looks so colorful because there are several types of gas and dust in the space between them. Gas clouds produce reddish emission nebulas, while glowing dust makes blue reflection nebulas. Rho Ophiuchi can be seen at the center of the blue nebula.

Antares lights up the yellowish-red clouds on the lower half of the image. The star is a red supergiant and one of the brighter objects in the night sky. Globular cluster M4 and Sigma Scorpii can also be seen in the image.

"It is such a beautiful part of the night sky, with bright colors from various types of nebulae shining in front of a myriad of Milky Way stars," O'Donoghue said.

O'Donoghue used a Takahashi FSQ106N, ATK1100 CCD camera and Takahashi EM200 mount with a 60mm Takahashi refractor with an ATK16 CCD camera for guiding on top of the FSQ. He used Baader Hydrogen Alpha and LRGB filters, which are housed in a True-Technology filter wheel.