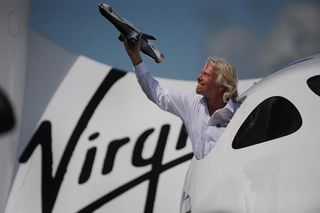 Earlier this month, for example, the company announced its plans for a satellite-launching venture known as LauncherOne, which could start lofting payloads to orbit by 2016.

Virgin Galactic founder Sir Richard Branson and CEO George Whitesides sat down with SPACE.com recently to talk about LauncherOne and what else the company hopes to accomplish in the future.

Richard Branson: There is no question what we announced today [LauncherOne] is one of the most exciting things Virgin has ever announced, as is the [space tourism] passenger side. [Video: Virgin Galactic Unveils LauncherOne Rocket]

SPACE.com: Is point-to-point suborbital travel something you will seriously start to investigate?

Branson: It’s a massive, massive long-term challenge, but I just love it that they are pushing for it. There are a lot of people that would like to move vehicles from place to place very quickly, and we’ll see what happens.

SPACE.com. Will we see LauncherOne’s liquid propulsion system developed into something for Virgin's spaceliner SpaceShipTwo, or a future version of SpaceShipTwo?

George Whitesides: I think we’ll have to see how things go. Clearly, having a highly reusable engine is a great thing, but at the same time we think the right application is LauncherOne.

SPACE.com: Are SpaceShipTwo and LauncherOne the largest investments for your Virgin group?

Branson: The venture capital description was a [former Virgin Galactic president] Will Whitehorn-ism. We love creating things that we can be proud of, and the space program is something that every single one of us who are involved in it can be incredibly proud of.

And, yes, it’s going to be incredible to be able to shake up the satellite industry as well. If you can offer the people who build satellites to send them into space at a fraction of the price they could in the past, you create whole new opportunities for people to get involved in all the benefits that come with satellites. [Gallery: Virgin Galactic's LauncherOne System]

SPACE.com: When did they bring a market study to you for launching satellites?

Branson: We decided some time ago that we wanted to do satellites, and we’ve been talking to a number of different customers. They [Surrey Satellite Technology, or SSTL] are a customer of Virgin Galactic, a very important customer, and we are happy to evolve systems for specific customers, if they want us to do so. I think we signed four or five contracts, including a contract with them [SSTL].

SPACE.com: Surrey Satellite Technology has put out a press release about optimizing SSTL satellites for LauncherOne. How will that work?

Whitesides: They are optimizing their satellites for our launcher. They are going to look at the specifications of our launch vehicle and say, "What is the best fit inside the cowl, and how can we pack the most energy in? What is the most perfect satellite for LauncherOne?"

So a customer can think, I want to do X or Y, imaging or something like that, and I can go to Surrey [Satellite Technology] and get a really optimized solution that gets the most out of LauncherOne.

SPACE.com: When did you decide that you wanted to do satellites?

Branson: We realized that we’ve got the vehicle [the WhiteKnightTwo mothership] that can carry the heaviest payload of any vehicle in the world, I think, and that would enable us to launch satellites.

And then George and the team set up a satellite division, and that division has gone out to various customers.

Whitesides: The company has been thinking about doing this for a long time, and we wanted to do it right. We wanted to announce it right, and we wanted do the right background work so people knew exactly what it could be.

SPACE.com: Aabar Investments is investing $110 million into LauncherOne. How much are you putting in?

Branson: We’ve put in a lot of money, in total — in the $2 [hundred million]-$300 million range, something like that.

Whitesides: No, it won’t. It was sort of a fun construction; we were brainstorming. It won’t be called Virgin Galactic Cargo — it won’t be the trade name we operate under.

SPACE.com: Will there be a broader brand name umbrella for satellite launching?

Branson: Quite often from interviews like this it gets our minds thinking, so we’ll have a think about it.

SPACE.com: Instead of kerosene could you put a biofuel into LauncherOne?

Branson: I think it is possible we could put a biofuel into LauncherOne. I think the amount of energy it is using is not enormous anyway, and once we have a rocket that works then they can start experimenting and seeing if we can make it carbon-neutral.

But the most important thing, the first step, is making sure we can put people safely into space and back again.

Whitesides: Gradually improving the environmental footprint is one thing we want to do, and there are different iterations of things we can do.

Branson: The environmental footprint of putting a satellite into space is massively improved — that’s what we announced today.