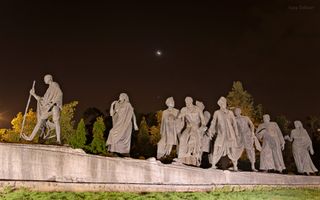 Ajay Talwar of The World at Night, took this photo from New Delhi, India on July 15 2012.  Jupiter is behind the moon and Venus appears near the horizon in the image. Venus looks larger and shines brighter because it’s closer to Earth. [Sky Maps for August Planet Watching]

Below the celestial orbs, the statue of Mahatma Gandhi leading the Dandi Memorial March stands. The statue is a symbol of Indian independence that marks the day Gandhi led a non-violent march against the British monopoly on the salt business.

Editor's note: If you have an amazing night sky photo you'd like to share for a possible story or image gallery, please contact managing editor Tariq Malik at tmalik@space.com.