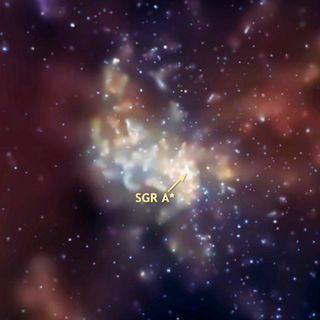 Chandra image of the supermassive black hole in the middle of our Galaxy, Sagittarius A*. The X-ray glow from the region close to Sgr A* shows that a relatively small number of low-mass stars that must have formed in a disk of gas around the black hole.
(Image: © NASA/CXC/MIT/F.K. Baganoff et al.)

Black holes are best known for ripping stars apart, but new observations of the supermassive black hole at the center of the Milky Way show that it's actually helping stars form.

Until now, scientists had disagreed about the origin of a collection of massive stars orbiting less than a light-year from our galaxy's central black hole, which scientists call Sagittarius A*. The stars were first seen by infrared telescopes.

The new finding, based on observations from the Chandra X-ray Observatory, confirms the theory that black holes can help form massive stars and gives more support to the idea that black holes play a big role in galaxy formation.

"In one of the most inhospitable places in our galaxy, stars have prevailed," said study co-author Sergei Nayakshin of the University of Leicester. "It appears that star formation is much more tenacious than we previously believed."

Astronomers still need to figure out how the process works. Many had expected the high-speed movement of material near the black hole would prevent star formation.

Either the immense disk of gas that orbits the black hole helps fuel the creation of new stars - what scientists call the disk model - or it may serve as a nursery for a cluster of lost stars in a process called the cluster migration model.

In the disk model, the gravity within the dense disk of gas that surrounds Sagittarius A* offsets the gravitational tug from the black hole and allows stars to form. As high-speed jets of radiation blast out of the black hole, they send a supersonic shockwave through the gas cloud, which compresses and heats the gas. The shockwave also ionizes the gas by taking away some of its electrons.

After the shock has passed, the cloud contracts and the ions recombine, creating radiation and transporting energy out of the cloud. The cooling causes the cloud to contract even more, and when a ball of gas becomes dense enough, it can collapse to form a star.

In this model, food for the black hole is being stolen to create stars, countering conventional black hole models that the accretion disk is the engine that feeds the black hole.

"Moreover, these stars did the stealing so efficiently that they became uncommonly heavy," Nayakshin said in a teleconference today. "An average star here is at least 10 times more massive than an average star elsewhere in the galaxy."

In the migration model, the stars actually formed in a cluster far away from the black hole and migrated in to form a ring around it. This scenario predicts there should be about a million low-mass stars accompanying the massive stars.

"The only problem observed here is that this star cluster should be very heavy, roughly a million star masses," said Nayakshin. "What we've found there is that you can't hide more than 10,000 young low mass stars there instead of a million, so clearly the cluster model is ruled out. So we are quite confident that stars did form in the disc."

Settling on the disk model presents its own set of problems, though. In most star clusters, low-mass stars comprise about 90 percent of the cluster's mass, with thousands of young, light stars surrounding a few rare massive stars. Since the cluster around Sagittarius A* is lacking in low-mass stars, scientists will now have to rethink theories of star cluster formation.

"You see, what's unusual here is the high mass stars normally are very rare, sort of like whales in the ocean, where as low mass stars are sort of like tuna in the ocean - there are much more of them. What is interesting here is that you definitely see the whales, because they are very bright, but you don't see as much tuna as expected," Nayakshin told SPACE.com. "So, whatever theory you may want to build to explain the formation mechanism of these stars, you have to do it in a way that would produce much fewer low mass stars per one high mass star."