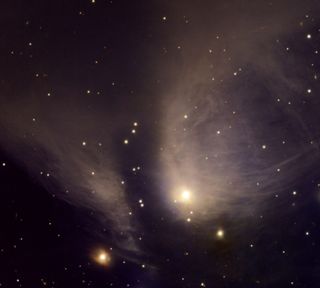 The wispy remains of the gas cloud that formed the bright star at bottom/center in RY Tau. This system is approximately 450 light-years away and spans about 2/3 of a light-year. The central star is a variable star that ranges between visual magnitudes 9 and 11 over an irregular period of time.

We wish on them, connect their dots to create winged horses, and even navigate by them. Yet just how stars get there in the first place remains somewhat of a mystery.

Star birth takes place over millions of years, so it's impossible to see the process actually playing out. Astronomers resort to looking at different stars in different stages of development to try and piece together a stellar life cycle.

Now, with the help of one of the largest telescopes in the world, a group of amateur Canadian star watchers has produced the best ever picture of the remains of a stellar nursery - one of the earliest stages of a star's life.

The star nursery, named RY Tau, was imaged using the Gemini Multi-Object Spectrograph, an eight-meter telescope located at the top of Mauna Kea, the largest volcano on Hawaii. The image, released Sunday, was captured in an unusual manner - during a Canadian-sponsored contest among amateur astronomers.

"This object is a classic, and on of the first-known examples of this type of young star," said Tracy Beck, a Gemini astronomer studying stellar nurseries. "I believe this is by far the deepest and most detailed image ever taken of this object and scientists will no doubt use these data for important research in the future."

RY Tau is classified as a T Tauri star. T Tauri class stars are the very youngest type of visible star, and are named after the standard of the class, which resides in the Taurus constellation. Like a butterfly poking its head out of the cocoon for the first time, T Tauri stars are seen shortly after emerging from the cloud of dust and gas where it formed.

As the star continues to mature - over the next few million years - the star will slowly blow away the cloud, which today spans about two thirds of a light year. This will likely leave a normal star, and maybe a protoplanetary disc, from which planets may someday form from leftover contents of the dust and gas cloud.

RY Tau isn't the only stellar nursery out there, but it's much closer to our solar system than some. RY Tau sits a mere 450 light years away, but another picturesque nursery, the DR 6 nebula, is 3,900 light years away. The DR 6 day-care facility appears to take on more responsibility than RY Tau - it's currently raising 10 giant stars, each 10 to 20 times the mass of our sun.

Perhaps the most famous nursery is the one that dangles just below Orion's belt. The Orion Nebula sparkles like a jewel in Orion's sword, which hangs from his belt. Even though it sits about 1,500 light years away, it is easily visible to the naked eye. Just beyond the Orion Nebula is the Hubble X nursery. Hubble X, about 1,600 light years away, started raising stars only 4 million years ago.

How a star is born

Throughout the universe there are clouds of dust and gases. Not much happens inside them until something - such as a collision with another cloud or a battering from a supernova - causes them to compress and collapse.

The cloud fragments as it collapses. Fragments can form a tight ball, and then the gas will heat up, and a spherical, rotating object is formed. This is called a protostar.

In large protostars, the temperature jumps to 18,000,000 degrees Fahrenheit and the internal pressure increases. Atoms in the center of the growing star begin to squish together and nuclear fusion begins to occur.

To see if RY Tau makes this difficult leap to full fledge star, astronomers say they'll have to check back in a couple million years.