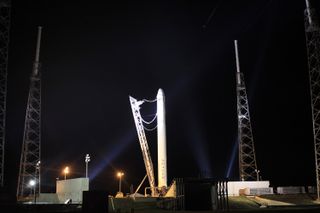 A SpaceX Falcon 9 rocket stands topped with an unmanned Dragon space capsule - the first commercial spacecraft ever to launch to the International Space Station - on May 17, 2012. The rocket and Dragon are due to launch on May 19, 2012 from Cape Canaveral Air Force Station, Florida.
(Image: © NASA/Jim Grossmann)

CAPE CANAVERAL, Fla. — The SpaceX Falcon 9 rocket has begun fueling for the planned launch today (May 19) of the first commercial spacecraft bound for the International Space Station.

The unmanned rocket is due to blast off from a pad here at the Cape Canaveral Air Force Station at 4:55 a.m. EDT (0855 GMT) on the milestone flight. If all goes well, Dragon will arrive near the space station on Monday (May 21) and be docked a day later.

The narrow liftoff opportunity is necessary for Dragon to catch up to the space station in orbit without expending an excess of fuel.

Falcon 9 began loading up with liquid oxygen and kerosene shortly after 1 a.m. EDT this morning (May 19). The flight will be the third for Falcon 9 and the second for Dragon. [Photos: SpaceX Poised for Historic Launch]

"If successful, there's no question this is a historic flight," Shotwell said.

The mission is the final test flight before Dragon can begin delivering cargo to the space station, helping to fill the gap left by the retired space shuttles. SpaceX is being partially funded by NASA's COTS (Commercial Orbital Transportation Services) program aimed at outsourcing travel to low-Earth orbit to the private spaceflight industry.

The high-stakes Dragon mission is a complex one, with the task of rendezvousing and docking in space something previously accomplished by only four governmental organizations.

"The energy levels involved, the precision that is required to get thousands of parts to all work perfectly together to achieve orbit and berthing with the space station, is extremely complex," Alan Lindemoyer, NASA's manager for the COTS and Commercial Crew Development programs. "This could be the last milestone in our agreement to complete this demonstration phase."

SpaceX has a $1.6 billion contract to fly 12 supply-delivery missions to the space station, and the company hopes to eventually carry crew as well.

For this demonstration mission, the capsule is loaded with food, supplies and science experiments to bring to the station.