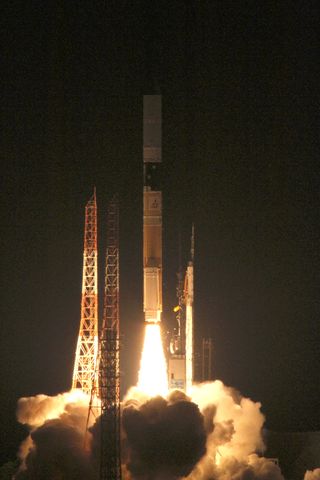 A Japanese H-2A rocket deployed four satellites in orbit Thursday, putting up a research mission to track the changing role of water in Earth's climate and a South Korean payload to gather high-resolution photos for environmental monitoring and security authorities.

The 187-foot-tall launcher blasted off at 1639 GMT (12:39 p.m. EDT) from the Tanegashima Space Center, a picturesque island spaceport in southern Japan. The rocket soared south from Tanegashima, its hydrogen-fueled main engine and twin solid rocket boosters rising into the sky in a ball of orange flame.

The H-2A rocket's upper stage reached orbit about 15 minutes after liftoff, then deployed four satellites for Japan and South Korea.

The Japan Aerospace Exploration Agency declared the mission a success, saying the rocket reached an orbit about 420 miles high with an inclination of 98.2 degrees to the equator. The orbit was very close to predictions, according to JAXA.

The first of the flight's passengers released was Kompsat 3, a high-resolution imaging satellite built in South Korea. The craft's sharp camera was provided by Astrium of Germany. [Amazing Rocket Launch Photos]

The Korea Aerospace Research Institute, which manages the mission, says Kompsat 3 will be used for mapping, agricultural, environmental and ocean monitoring purposes. Kompsat 3's camera will resolve objects as small as 70 centimeters, or 2.3 feet, on Earth's surface.

The satellite for JAXA's first Global Change Observation Mission, officially known GCOM W1, separated from the H-2A rocket a few minutes after Kompsat 3. Nicknamed Shizuku, which is Japanese for water drop, the mission will measure moisture in Earth's atmosphere, soil and trapped in polar ice caps.

The 4,389-pound satellite extended its solar panels and deployed its microwave radiometer antenna after its release, according to JAXA.

Shizuku carries a bigger, higher resolution version of the Advanced Microwave Scanning Radiometer on NASA's Aqua observatory. The instrument is a spinning antenna capable of collecting profiles of water vapor through the atmosphere and to Earth's surface.

The scanning radiometer on Aqua stopped functioning last year, and the AMSR sensor was flown on Japan's ADEOS 2 satellite, which failed in 2003 after less than a year in space.

A radiometer was also aboard the European Space Agency's Envisat satellite, but its mission unexpectedly ended in April.

With those failures, scientists were forced to turn to other, less precise sensors for water vapor data.

The National Oceanic and Atmospheric Administration, the agency responsible for U.S. climate and weather research, will receive access to Shizuku data through a memorandum of understanding signed last year.

"GCOM W1, given the Japanese nickname Shizuku, is the first satellite of the GCOM series which enables us to observe global-scale, long-term climate change," said Masanori Homma, executive director for space applications mission directorate at JAXA. "We expect GCOM W1, observing data of the global water cycle, will contribute greatly to NOAA's activities."

NOAA will also receive data from Shizuku at a ground station in Svalbard, Norway, and distribute the information to Japanese and U.S. scientists, the agency said in a press release. Data from NOAA's Suomi NPP weather satellite launched last year will also be shared with JAXA.

The agreement also provides for sharing with Japan data from NOAA's Joint Polar Satellite System satellites, a series of next-generation weather observatories due to begin launching in 2017.

"The cooperation between NOAA and JAXA is strong," said Mary Kicza, assistant administrator for NOAA's satellite and information service. "JPSS will extend the agreement, providing significant and lasting benefits to scientists around the world."