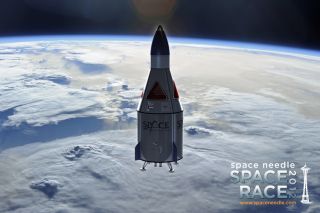 Five would-be space tourists have been battling in Seattle this week for a free suborbital spaceflight, a grand prize that will be announced tomorrow (May 9) by famed moonwalker Buzz Aldrin.

The five contestants are finalists in Space Race 2012, a competition sponsored by Seattle's Space Needle and the private spaceflight company Space Adventures. The contest officially opened on Aug. 1, 2011 and attracted more than 50,000 entrants from all over the country, according to Space Needle officials.

The final five met in Seattle Monday (May 7) to begin a series of mysterious challenges whose nature was kept a secret by contest organizers. Monday's activities involved an indoor skydiving competition, during which finalists had to complete a number of tasks while floating in a wind tunnel.

Two contestants were eliminated after this event, leaving only Lauren Furgason of Seattle, Sara Cook of Washington, D.C., and Gregory Schneider of Tucson, Ariz.

"The field is down to three," Space Needle officials wrote Tuesday in a Facebook post. "Challenge #2 for Space Race finalists is about to start at the Museum of Flight! Two will move on to tomorrow's final round."

The competition will conclude at the Space Needle Wednesday, when NASA astronaut Buzz Aldrin — who in 1969 became the second person to set foot on the moon — announces the winner.

That lucky person will receive a free suborbital spaceflight, up to an altitude of about 62 miles (100 kilometers), aboard a vehicle provided by Armadillo Aerospace. The Virgina-based Space Adventures is selling seats for the Armadillo spacecraft at $110,000 per person, so that's the approximate value of the prize.

Like the other companies gearing up to launch people to suborbital space, Armadillo isn't quite ready to do so yet, so the launch date has not been officially set. Space Race 2012 is also offering a variety of other prizes, such as a free trip aboard the microgravity-inducing aircraft G-Force One.

All of the finalists said getting to space is a long-standing dream. Schneider said that he also hopes to inspire his children to dream big.

"I think if I get to do something this amazing, they'll think, 'Well, you know, we can do anything, too,'" he told Seattle's KING 5 News.