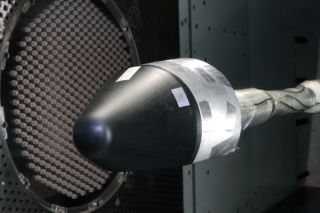 The curtain of secrecy is being raised by Blue Origin, a private entrepreneurial space group designing both suborbital and orbital vehicles.

Backed by Amazon.com mogul Jeff Bezos, the Kent, Wash.-based Blue Origin group has completed wind tunnel testing of its next-generation craft, simply called the "Space Vehicle." It would transport up to seven astronauts to low-Earth orbit and the International Space Station. Though the company has been stingy on public information in the past, new details of the recent work have been released.

The testing was conducted as part of Blue Origin's partnership with NASA, under the agency's Commercial Crew Development (CCDev) program, which awarded the company $22 million in 2011 to develop the vehicle. [Photos: Blue Origin's Secretive Spaceship]

"This is just one of the vehicle's many features that enhance the safety and affordability of human spaceflight, a goal we share with NASA," Meyerson said in a statement.

Also under CCDev, Blue Origin is ready to start conducting tests of its BE-3 engine thrust chamber assembly — the engine's combustion chamber and nozzle — for the BE-3's 100,000 pounds of thrust, liquid oxygen/liquid hydrogen-fueled rocket motor.

The BE-3 will be used on Blue Origin's reusable launch vehicle.

"It's on the E-1 test stand now," at NASA's Stennis Space Center in Mississippi, "and we're close to conducting the first firings," said Brett Alexander, director of business development and strategy for Blue Origin, who is based in Washington, D.C.

Rocket motor testing at Stennis is scheduled to start in May, Alexander told SPACE.com.

"The pusher escape system for our suborbital system [called New Shepard] means you can get the capsule and the people away at anytime, for any reason," Alexander said.

Founded in 2000, the company explains that it has a long-term vision of greatly increasing the number of people that fly into space through low-cost, highly reliable commercial space transportation.

But why so tight-lipped about its enterprising work?

"There are really two reasons," Alexander said. "One is we like to talk about things we've done — not things we're planning to do. So it's more about accomplishments. After all, the space business is hard. Things always take longer than you'd expect. I think that's true for newer space companies, as well as established space companies."

Another reason, Alexander continued, is that "we don't want to get off-focus. We're a very intense engineering, technical company. We don't have a lot of accountants for contracts…and the more time we spend talking about things, there's less time we spend doing things."

Regarding what happens with NASA's CCDev program in the future, Alexander said Blue Origin intends to go forward with or without the space agency.

NASA embracing the commercial sector so that private firms can move into low-Earth orbit is the right approach, Alexander said, a step that propels the space agency farther into deep space.

"The burden now is less on NASA and more on the private sector to deliver," Alexander added.

Blue Origin makes use of its own spaceport located about 25 miles north of Van Horn, Texas.

Over the years, test flights of Blue Origin hardware from the spaceport have seen both success and at least one publicly announced crash in 2011.

"We always expected losing a test vehicle at some point," Alexander said. "We'd like more tests than fewer tests. But in the end, it is rocket science. It's hard and you expect that."

Blue Origin's New Shepard system is being pursued to provide frequent opportunities for researchers to fly experiments into suborbital space. Research experiments can take sensor readings of space, the sky and the Earth, and will experience microgravity environments for three or more minutes.

Alexander said that he thought the suborbital market is real, but the question is how large is it going to be.

"If spaceflight were ubiquitous there would be tons of uses for it…tons of science being done," Alexander said. Developing the capability to be responsive, cost-effective and to fit into business cycles of research firms is essential, he said.

"As long as we are at least focused on that…we've got a good shot at doing it," Alexander said. "I think those markets are real. The question is, are they enough to sustain a business on their own…or are they going to be a side activity for human spaceflight, tourism, adventure experiences?"